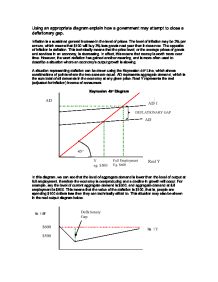 Using an appropriate diagram explain how a government may attempt to close a deflationary gap.

Using an appropriate diagram explain how a government may attempt to close a deflationary gap. Inflation is a sustained general increase in the level of prices. The level of inflation may be 3% per annum, which means that $100 will buy 3% less goods next year than it does now. The opposite of inflation is deflation. This technically means that the price level, or the average prices of goods and services in an economy, is decreasing. In effect, this means that money is worth more over time. However, the word deflation has gained another meaning, and is more often used to describe a situation where an economy's output growth is slowing. A situation representing deflation can be drawn using the Keynesian 45? Line, which shows combinations of points where the two axes are equal. AD represents aggregate demand, which is the sum total of all demands in the economy at any given price. ...read more.

Fiscal policy may consist of government injections into an economy in money, or decreases in taxes that raise real income. An example of use of fiscal policy to recover from deflation of an economy is the massive public works projects that Japan funded in the mid 1990's which stimulated the economy, and helped to move it out of a depression. One would think that this government spending would be reflected by an increase in taxes to fund such works, however, as in the case of Japan, the government may go into budget deficit to fund works, or may use money leftover from budgeting, called budget surplus. The fact that a massive increase in government spending stimulates the economy is due to the multiplier effect. In essence, the multiplier shows how increases in planned injections into the economy lead to larger increases in output and income, and therefore GNP and AD rise. ...read more.

That is, how large will the increase in National Income be in proportion to initial spending? The size of the multiplier is determined by the equation Size of multiplier = 1 (1-mpc) MPC is the marginal propensity to consume. This refers to the amount of an increase in autonomous (outside the economy) income is spent on domestic goods and services and how much is saved. When autonomous spending increases aggregate expenditure, the increase will increase household income. This income may leak out in the form of savings, taxes or spending on imports, but the rest will be spent on domestic goods and services. The opposite of marginal propensity to consume is marginal propensity to save, which refers to what proportion of an autonomous income increase will be saved as opposed to spent. For example, if the MPC is 0.5 the multiplier will be 2, which means that an increase in government spending of $100 million will increase NY by $200 million. The multiplier effect and its use by governments to stimulate AD can be shown in the diagram below. ...read more.

This essay responds to the question well, but only after the first paragraph. The introduction gives an unnecessary definition and summary of inflation, which is irrelevant here. It is a common mistake to think of a question regarding the deflationary ...

This essay responds to the question well, but only after the first paragraph. The introduction gives an unnecessary definition and summary of inflation, which is irrelevant here. It is a common mistake to think of a question regarding the deflationary gap as a question about inflation and deflation, whereas it is looking for a discussion of how to move output to full employment levels. Past the introduction, this essay does engage well with this task, looking at how the multiplier and government spending can influence. Diagrams have not transferred over, but by looking at the comments, they seem to be relevant. In a question such as this, it is vital to include diagrams as this is the easiest way to define a deflationary gap and look at policies to reduce it.

The analysis here is sound. There is a strong awareness of how aggregate demand and supply are at equilibrium to give the level of output, and why this is below the level of full employment. Building a good foundation of knowledge early on allows you to move swiftly into analysis. I particularly liked the historic example of Japan investing in infrastructure, as this shows the ability to apply theory to real life situations. It was great to see a perceptive comment that an increase in government spending isn't always matched by increases in taxation, as a government may choose to run a budget deficit. The multiplier is always a tricky concept, and this essay explores it well. There is a clear definition, and some numerical analysis. I would've liked to have seen some discussion of the significance of the multiplier, showing how a small increase in government spending can help reduce the deflationary gap. It seems as if the argument moves away from the question near the end - it is vital to stay on focus.

The structure here is fine, having a clear introduction. I would've liked to have seen some attempt at a conclusion, weaving the argument together and posing a justified judgement. Although the question doesn't prompt for an evaluative response, a conclusion is often a good place to make a passing comment. Technical terms are used fluently throughout, and the style allows for a convincing argument. It was a shame that some of the points don't upon the analysis to answer question! Spelling, punctuation and grammar are fine.