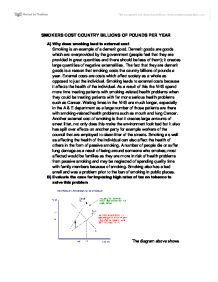 Why does smoking lead to an external cost?

SMOKERS COST COUNTRY BILLIONS OF POUNDS PER YEAR A) Why does smoking lead to external cost Smoking is an example of a demerit good. Demerit goods are goods which are overprovided by the government (people feel that they are provided in great quantities and there should be less of them); it creates large quantities of negative externalities. The fact that they are demerit goods is a reason that smoking costs the country billions of pounds a year. External costs are costs which affect society as a whole as opposed to just the individual. Smoking leads to external costs because it affects the health of the individual. As a result of this the NHS spend more time treating patients with smoking-related health problems when they could be treating patients with far more serious health problems such as Cancer. Waiting times in the NHS are much longer, especially in the A & E department as a large number of those patients are there with smoking-related health problems such as mouth and lung Cancer. Another external cost of smoking is that it creates large amounts of street litter, not only does this make the environment look bad but it also has spill over effects on another party for example workers of the council that are employed to clean litter of the streets. Smoking as well as affecting the health of the individual can also affect the health of others in the form of passive smoking. A number of people die or suffer lung damage as a result of being around someone who smokes; most affected would be families as they are more in risk of health problems from passive smoking and may be neglected of spending quality time with family members because of smoking. Smoking also has a bad smell and was a problem prior to the ban of smoking in public places. B) Evaluate the case for imposing high rates of tax on tobacco to solve this problem The diagram above shows the impact of a high rate of tax on cigarettes. ...read more.

This raises the level of productivity as output cannot vary as it's done by machine, it saves the costs of employees and having to pay for longer working hours although could lead to unemployment and machinery can be hard to operate and can malfunction. Another way to raise productivity is by improving the education system or making education compulsory up to the age of 18, therefore people will be more prepared for the working world and firms will benefit from new skilled labour that has more developed knowledge in a particular field. For existing workers firms could run training schemes to improve the productivity of the firm so that workers can become more efficient at their job and develop a more sustained knowledge of it through the help of specialists. However, this can be long and costly. Other methods of raising productivity include reformed infrastructure. B) Evaluate the view that the UK's trade deficit can only be solved by the implementation of supply-side policies Supply-side policies are government policies designed to increase the productive potential of the economy and push the long run aggregate demand curve to the right as illustrated in the diagram below. The advantages of supply-side policies are that it improves the productivity of the firm. Workers produce better quality goods at much lower prices. There is more competition in the economy which leads to better quality good and hence more choice and innovation in the market. The disadvantage of supply side policies is that the current account is affected by other factors such as the exchange rate and world demand and exogenous shocks. Other methods could be used such as depreciation of the pound, import controls or higher UK taxes in order to solve the UK's trade deficit. In conclusion it is clear that the UK's trade deficit cannot only be solved by the implementation of supply side policies. It can also be solved by some of the above listed. Perhaps a combination of supply-side policies and some of the above would work best. ?? ?? ?? ?? ...read more.