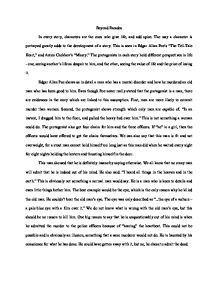 In every story, characters are the ones who give life, and add spice. The way a character is portrayed greatly adds to the development of a story. This is seen in Edgar Allan Poe’s “The Tell-Tale Heart,” and Anton Chekhov’s “Misery.” The protagonists in each story hold different perspectives in life - one, seeing another’s life as despair to him, and the other, seeing the value of life and the price of losing it.

Edgar Allan Poe shows us in detail a man who has a mental disorder and how he murdered an old man who has been good to him. Even though Poe never really stated that the protagonist is a man, there are evidences in the story which are linked to this assumption. First, men are more likely to commit murder than women. Second, the protagonist shows strength which only men are capable of. “In an instant, I dragged him to the floor, and pulled the heavy bed over him.” This is not something a woman could do. The protagonist also got four chairs for him and the three officers. If “he” is a girl, then the officers would have offered to get the chairs themselves. We can also say that this man is fit and not overweight, for a stout man cannot hold himself too long just as this man did when he waited every night for eight nights holding the lantern and thrusting himself in the door.

This man showed that he is definitely insane by saying otherwise. We all know that no crazy man will admit that he is indeed out of his mind. He also said: “I heard all things in the heaven and in the earth.” This is obviously not something a normal man would say. He is a man who is keen to details and even little things bother him. The best example would be the eye, which is the only reason why he killed the old man. He couldn’t bear the old man’s eye. The eye was only described as “...the eye of a vulture – a pale blue eye with a film over it.” We do not know what is wrong with the old man’s eye, but this should be no reason to kill him. One big reason to say that he is unquestionably out of his mind is when he admitted the murder to the police officers because of “hearing” the heartbeat. This could not be possible and is obviously an illusion, something that a sane murderer would not do. He is haunted by his conscience for what he has done. He could have gotten away with it, but no, he chose to admit the deed.

The story was told in first person, which is unreliable. We say that it is unreliable because we don’t know for sure if what he’s saying is true. No one can account for his words, and no one witnessed what happened. Poe did not name the protagonist in this story. He may have put himself in the murderer’s shoes and that’s what he wants everyone to do. He wants everyone to relate to it and feel what the murderer felt. Without naming the man, he can represent anyone, which adds to the thrill of reading this story. You can feel what the murderer is feeling, and your heart also starts beating fast as the officers arrive, as if you were responsible for the murder.

Anton Chekov’s “Misery” however, shows us a story about an old man – Ïona Potapov. Iona lost his son about a week ago and wants someone to talk to about it. Nevertheless, no one cared about this old man and what he has to say.

Iona was described in the story as: “the sledge-driver, is all white like a ghost. ... If a regular snowdrift fell on him it seems as though even then he would not think it necessary to shake it off...” Here, we can see that Iona is too overwhelmed about something (maybe about what happened to his son) that he doesn’t even care about his physical appearance anymore.

Iona however, tries to tell other people about his grief. He first talked to the officer who just pretended to be asleep so as not to listen to his mourns. Next, he talked to the hunchback who is clearly an abhorrent man. The hunchback talked to him as if he is not a person. “He hears abuse addressed to him, he sees people, and the feeling of loneliness begins little by little to be less heavy on his heart.”  Even though he was abused by the hunchback, he still felt as though he has someone. For him, that is better than not having anyone to talk to at all.  He is rejected at the time he needed someone to hear him out. He needed an outlet to his pain. Someone he could talk to, to relieve the pain that he is feeling for the loss of his son.

We can also say that Iona is somehow insane, for he did things which a normal person won’t do: He is driving like crazy. His passengers were complaining for the way he drove. He is obviously out of his mind. He is too confused to think straight or even drive straight. He is also behaving oddly: “Iona fidgets on the box as though they were sitting on thorns, jerks his elbows, and turns his eyes about like one possessed as though he did not know where he was or why he was there.” One very obvious reason also is that he talked to his mare about his personal problem. And we all know that a normal person would not act that way. He may not be totally insane, but somehow, for that moment or for that day, he is totally not in his normal mind.

Iona just needed someone, he didn’t care who as long as he can release his pain. And he really didn’t care who, for that someone, who actually helped him and listened, was his horse.

Seeing these two characters, we may say that they are totally different. But actually, they are somehow the same in some sense. The main similarity of Iona (Misery) and the murderer (The Tell-Tale Heart) is that they both needed outlets to their pain. But, they solved their problems differently. The murderer killed the old man. Iona, on the other hand, did not kill the officer nor the hunchback, he just talked to his mare instead.

Iona also treated his mare as though it was human, the same thing that the murderer did with the heart. Both of these things influenced them a lot in the story. They are not treated as just an animal or a body part. They have their own purpose and without them, the plot would be totally different, or there would be no plot at all. Both of these characters also showed signs of being insane, though one is more obvious than the other.

Something completely different about the two of them is how they treat life. The murderer felt that it was just like a game. Who dies first, loses. He killed the old man for his eye. Who kills for an eye? Most people would just bear with it, but he, felt the need to dispose of the old man. Iona on the other hand, gave importance to life. He lost his son, someone who is important to him, that’s why he is so desperate for a shoulder to cry on. If the murderer was in his shoes, he would have killed the officer the moment he closed his eyes to sleep, or the hunchback the moment he sees him because he would be annoyed and confused. This just shows that they respond differently to their problems.

We can see that these two characters respond differently but they also have similarities. The way that Poe and Chekhov showed us these characters made us think that they are totally different. But now, we can see their resemblance to each other. These authors have very different styles but they somehow made a connection with their characters.

Edgar Allan Poe’s style of letting the readers relate to the character is somehow effective. You can easily get into the story and understand it more. His use of an unreliable narrator also adds to the story. People will be able to insert their own ideas into the story. Chekhov on the other hand, described his character very well. The way he introduced him made the readers pity the character at once which gave them a well grasp of the story. Both of them used symbols as characters in the story and that also added to the exceptionality of their stories. Overall, both authors did a great job in developing the characters with their unique styles.