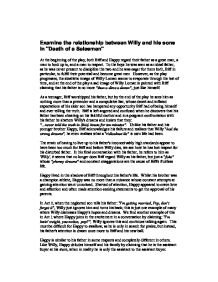 Examine the relationship between Willy and his sons in &quot;Death of a Salesman&quot;

Examine the relationship between Willy and his sons in "Death of a Salesman" At the beginning of the play, both Biff and Happy regard their father as a great man, a man to look up to, and a man to respect. To the boys he was seen as an ideal father, as he was never present to discipline the two and he was eager for them both, Biff in particular, to fulfil their potential and become great men However, as the play progresses, the idealistic image of Willy Loman seems to evaporate through the test of time, and at the end of the play a sad image of Willy Loman is painted with Biff claiming that his father is no more "than a dime a dozen", just like himself. As a teenager, Biff worshipped his father, but by the end of the play he sees him as nothing more than a pretender and a compulsive liar, whose deceit and inflated expectations of his elder son has hampered any opportunity Biff had of being himself and ever telling the truth. Biff is left angered and confused when he discovers that his father has been cheating on his faithful mother and in a poignant confrontation with his father he shatters Willy's dreams and insists that they: "...never told the truth in (this) house for ten minutes". ...read more.

Willy Loman was a salesman first and a father second. Often absent from his home, he neglected his parental duties and lacked discipline. He allowed his sons to do as they wished, this it seems, contributed to the boys' failure in life. As Biff himself said: "I never got anywhere because you blew me so full of hot air, I could never stand taking orders from anybody!" Willy neglected to instil any sense of integrity or morality in the boys, he even encouraged them to steal, and simply laughs when he discovers that Biff has stolen a football, and claims that the coach will probably "congratulate you [Biff] on your initiative." With Willy as a role model, how could the boys ever expect to make something of their lives? Willy believed that success came from being well liked and preached this to his sons; he insisted that because their neighbour Bernard, was not well liked, he would not succeed in life. However, when Willy runs into Bernard as an adult, Bernard is a successful lawyer who is arguing a case before the Supreme Court, whilst Biff, who was well liked, is nothing more than a "lazy bum", in Willy's eyes. Throughout the play, Willy is in confrontation with one thing: failure. At first he is a failure because his business is slowing down and he is losing popularity. ...read more.

All things considered, it is fair to say that the relationship between Willy Loman and his sons is a complex one. Biff was the favoured son of Willy, whilst Happy was more similar to his father than Biff. Happy could see no wrong in Willy throughout, and vowed to fight his father's dream, where as the elder son, Biff could see his father's shortcomings. Their relationship with their mother was something very different to the one with their father, who they wanted to continually impress The deterioration of Willy's state of mind and mental health plays a key role in the deterioration of the relationship between Willy and Biff, on which the play's internal conflict is based. As the play progresses, Happy's faith in his father strengthens, and he is inspired by his father's "fight". Whereas Biff's feelings towards his father are mixed. He loves his father, but no longer respects him; Biff believes that it is his father's fault that Biff is in a dead end job with no prospects for a better future and finds it almost impossible to forgive him for having an affair. Willy Loman wanted his children to be "great", this was his last hope in life, but it is fair to say that he wasn't a good father. Although his heart was in the right place, his method of upbringing the boys can only be seen as a sign of a confused and deluded man, who commited the ultimate sacrifice to be well liked: suicide. Thomas Morris Words: 1460 ...read more.