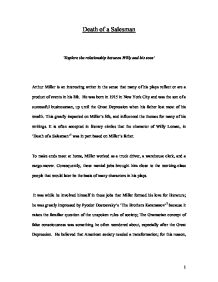 Death of a Salesman. 'Explore the relationship between w***y and his sons'

Death of a Salesman 'Explore the relationship between w***y and his sons' Arthur Miller is an interesting writer in the sense that many of his plays reflect or are a product of events in his life. He was born in 1915 in New York City and was the son of a successful businessman, up until the Great Depression when his father lost most of his wealth. This greatly impacted on Miller's life, and influenced the themes for many of his writings. It is often accepted in literary circles that the character of w***y Loman, in 'Death of a Salesman'1 was in part based on Miller's father. To make ends meet at home, Miller worked as a truck driver, a warehouse clerk, and a cargo-mover. Consequently, these menial jobs brought him close to the working-class people that would later be the basis of many characters in his plays. It was while he involved himself in these jobs that Miller formed his love for literature; he was greatly impressed by Fyodor Dostoevsky's 'The Brothers Karamazov'2 because it raises the familiar question of the unspoken rules of society; The Gramscian concept of false consciousness was something he often wondered about, especially after the Great Depression. He believed that American society needed a transformation; for this reason, many of his earlier plays showed sympathetic portrayals and compassionate characterisations of his characters. ...read more.

w***y has clung to the idea of the American Dream. He believes in the superficial edicts of acquired reputation, good looks and consumerism. Everything that he believes in is without substance. His religion is that of financial worship and status in the vain hope that he can claw his way up the social ladder towards being upper-middle class. Essentially 'money is barren', (Calvin)4 and therefore w***y's dreams are empty and shallow. It is with these characteristics that w***y and his wife Linda has unsuccessfully raised two sons; Happy and Biff. Even the names are symbolic! Both names are onomatopoeic in sound. Happy/Hap gives the audience an image of one the seven dwarves, slightly stupid and grinning. Biff is a short, strong sounding name. Both sons are in their thirty's, with Biff being older than Happy by two years. They are both staying in the family home for the night. Viewing the play on face value an audience could simply decide that w***y's values have seeped into his sons' consciousnesses, however Miller is using Biff and Happy to demonstrate two extremes of attitude. It was Oscar Wilde, who said, "Children begin by loving their parents, after a while they judge them, rarely do they forgive them' 5 In the case of the Loman sons, this is very true. ...read more.

He has become in Biff's words: "You Fake! You phoney little fake! You fake!"(Ibid, page 92) Biff blames his father for his own failures but at the same time has grown to understand that w***y has lived his life with false hope and those, like his father, who buy into this fraudulent delusion are at best misguided. It is Biff, who in Shakespearean style, at the restaurant who says: "You've just seen a prince walk by. A fine, troubled prince. A hard-working, unappreciated prince" (Ibid, page 86) Biff understands that he can not longer lay the blame for his life solely at the feet of his father. His father is just a product of American society. The play still holds relevance today, some sixty years since its first performance. The American dream is still built on lies and debt. Unfortunately Miller could not possibly have foreseen how destructive that dream was to become on a global scale. Where American values are forced into our consciousness by the means of mass media and even more aggressively through their foreign policies. In this play Arthur Miller added expressionism to realism which enabled us to see into the minds of characters and thereby interpret the play in a realistic and relevant way. In Requiem when Linda speaks the line; 'We're free...we're free' (Ibid , Pg 108) Miller is most definitely speaking of the cycle of life, that all things must be free to live and die, leaving nothing behind, just like w***y Loman. ...read more.