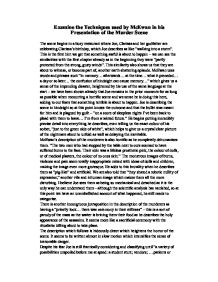 Examine the techniques used by McEwan in his presentation of the murder scene.

Examine the Techniques used by McEwan in his Presentation of the Murder Scene The scene begins in a busy restaurant where Joe, Clarissa and her godfather are celebrating Clarissa's birthday, which Joe describes as like "walking into a storm". This is the first hint we get that something awful is about to happen - we can see the similarities with the first chapter already as in the beginning they were "partly protected from the strong, gusty winds". This similarity also shows us that they are about to witness, or become part of, another earth-shattering episode. McEwan uses words and phrases such "in memory... afterwards... at the time... what it preceded... a day or so later... the confusion of hindsight can cause memory..." which gives us a sense of the impending disaster, heightened by his use of the same language at the start - we have been shown already that Joe remains in the prior moments for as long as possible when recounting a horrific scene and we sense he is doing this here, adding to our fears that something terrible is about to happen. Joe is describing the scene in hindsight so at this point knows the outcome and that the bullet was meant for him and is plagued by guilt - "on a score of sleepless nights I've been back to plead with them to leave... ...read more.

It seems to be written almost in slow motion which intensifies the sense of inexorable danger. Despite his fear Joe is still frantically considering and classifying until "a variety of possibilities unspoiled before me at speed: a student stunt; vendors; ... patients or clients; some new version of the kissogram; crazy members of the family come to embarrass." All his ideas seem quite innocent and harmless which leads us to think there isn't anything to worry about and, despite all the warnings and indications of violence, we have nothing to fear, the two men are not dangerous. The same technique is used when Joe is describing "a black stick, a wand" which makes us think of innocent childhood games. The black stick is also reminiscent of the description of Logan's fall, making it synonymous with death and fear to Joe and the reader. "The tall man, ready to cast his spell, pointed his wand at Colin Tapp." This makes the scene seem innocent and the men almost enchanting but also shows us that Joe doesn't really know what's happening as he describes things such as religion and magic which we know he doesn't believe in which suggests that really we may still have reason to be afraid of the inhuman men. ...read more.

"to get people to do things for me" so we are aware of the similarities between Parry's hints at what was coming and the incident. The mention of the "man who sat eating alone, facing away from us" hints at the possibility it is Parry, especially after his absence from his post outside the flat that morning so our fears are confirmed when the man draws his "wand". It is surprising Joe that has no idea of who it is, until it is too late, after his careful consideration of all the threats and his research, and he asks himself, with a sense of regret, "how had I failed to recognise Parry?". Joe's terrible realisation of the significance of Parry's presence is made worse as it is so unexpected, "I got it, I understood completely, it came to me without effort... Our two tables - their composition, the numbers, the sexes, the relative ages. How had Parry known?" Joe realises the truth without his usual logical analysis but with a sudden and appalling certainty. "It was a mistake. Nothing personal. It was a contract, and it had been bungled. It should have been me." The air of finality and resignation is horrible as Joe knows, absolutely, that he should have been killed. ...read more.