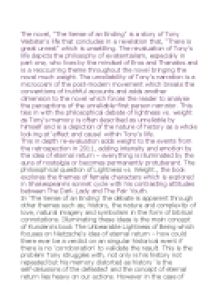 Explore Barnes and Shakespeares presentation of the philosophical debate of lightness vs. weight and consider how 'The Unbearable Lightness of Being' has illuminated your ideas.

﻿The novel, ?The Sense of an Ending? is a story of Tony Webster's life that concludes in a revelation that, ?There is great unrest? which is unsettling. The revaluation of Tony's life depicts the philosophy of existentialism, especially in part one, who lives by the mindset of Eros and Thanatos and is a reoccurring theme throughout the novel bringing the novel much weight. The unreliability of Tony's narration is a microcosm of the post-modern movement which breaks the conventions of truthful accounts and adds another dimension to the novel which forces the reader to analyse the perceptions of the unreliable-first person narrator. This ties in with the philosophical debate of lightness vs. weight as Tony's memory is often described as unreliable by himself and is a depiction of the nature of history as a whole looking at 'effect and cause' within Tony's life. This in depth re-evaluation adds weight to the events from the retrospection in 2011, adding intensity and emotion by the idea of eternal return ? everything is illuminated by the aura of nostalgia or becomes permanently protuberant. The philosophical question of Lightness vs. Weight., the book explores the themes of female characters which is explored in Shakespeare's sonnet cycle with his contrasting attitudes between The Dark Lady and The Fair Youth. In 'The Sense of an Ending' the debate is apparent through other themes such as; history, the nature and complexity of love, natural imagery and symbolism in the form of biblical connotations. Illuminating these ideas is the main concept of Kundera's book The Unbearable Lightness of Being which focuses on Nietzsche's idea of eternal return ? how could there ever be a verdict on an singular historical event if there is no 'corroboration' to validate the result. This is the problem Tony struggles with, not only is his history not repeated but his memory distorted as history 'is the self-delusions of the defeated' and the concept of eternal return lies heavy on our actions. ...read more.

This debate leads us further to a feminist critique of the men portrayed in all three texts. In particular Tony, whose teenage anticipation to drop his pen and be 'released into our lives' never turned out the way he expected. Arguably, men have picturesque vision of the world ahead of them, one of extreme lightness. It is the women that hold the suffering and responsibility, both Robson and Adrian kill themselves freeing themselves of the burden of family life. The vast use of imagery is also a prominent motif to illustrate the debate of lightness and weight. In Sonnet 116, the vast outdoor imagery of stars, lighthouses and sea reflects the freedom that love can experience. The comparison of love to stars is essential ? ?the star to every wandering bark?? the lightness and purpose that love brings, followed by ?Whose worth's unknown, although his height be taken.? The poet foregrounds this line to clarify that it cannot be certain what substance love consists of but can be measured by how much it elevates you. It can be argued that love is merely the perception of the ?light?; the lightness of beauty, kindness, euphoria and the happiness is only temporary ? the star can only be seen in that altitude in the night when ships are lost and lonely. Thus, love is the product of loneliness and desperation and therefore brings weight as a long-term effect. It is only required when one's sense of integrity is broken. The initial impact of lightness is a free and liberal experience but in the debate of lightness vs. weight, when the lightness of love is eternally reoccurring and the effect brings pain and misery, in addition when the situation inevitably changes and this is the very prominent structure of every Shakespearian tragedy and sonnet. However, taking context into consideration. Shakespeare presents the theme of the complexity and nature of love, on the surface, as a promising and optimistic with a lack of realism. ...read more.

The following archaic form of the lexis ?thee? validates the value and Godliness of the person the persona is referring to. This subverts the religious intention of pilgrimage to a journey of love. Barnes? novel and Sonnet 27, prove to be a Godless depiction. This is also exemplified in the Unbearable Lightness of Being, where one side of the street is the ?almighty lightness? of the Cathedral which is juxtaposed by the brothel across the street full of prostitutes - ?bored cats? illustrating the sexual imperatives of men. In this sense, a patriarchal tone can be implemented in all three texts ? the weight of men and their complexities are blasphemies and are destructive to the light of God and Salvation. Adrian ? the embodiment of Christ ? had fallen in the action of his suicide after committing adultery which inflicted suffering on Veronica and indirectly to his son. Tony was a catalyst to the union of Sara Ford and Adrian therefore also part of of this feminist theory. Overall, the philisophical debate of Lightness and Weight is depicted in 'The Sense of An Ending' in the forms of corroboration of history, Veronica and Margaret, the heaviness and lightness of Art and Literature, the use of imagery and biblical symbolism. Shakespeare illuminates this theme by the complexity and nature of love, 'lust and love', imagery and and again biblical symbolism. The concept of lightness and weight was taken from Kundera's book focusing on the philosophy of what is the best way of life. To live in a sense of lightness ? liberty and free spirit or be weighed down by emotions and desire. Overall, it seems Tony wishes he had followed the philosophy of heaviness with Veronica as his consequences of his lightness had a huge impact ? the effect being Adrian's suicide and Shakespeare wanting to follow the philosophy of lightness, he wants to be as free and promiscuous as the The Fair Youth and The Dark Lady but is burdened by his emotions and desperation for the overwhelming bond of love. ...read more.

This student written piece of work is one of many that can be found in our AS and A Level English Literature section.