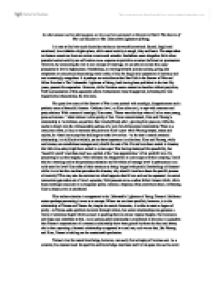 In what manner and to what purpose are love and s*x presented as discrete in Ninh's The Sorrow of War and Kundera's The Unbearable Lightness of Being. It is rare to find two such dissimilar entities so irrevocably entwined. Sacred, fragile and emotional, love inhabits a higher plane, while carnal activity is rough, dirty and basic. The steps taken to distance ourselves from our simian cousins and amoebic forefathers seem altogether futile when potential s****l activity can still reduce us as a species to primitive cavemen h**l-bent on procreation. However, by connecting the two in our concept of marriage, we are able to elevate this nasty pleasantry to love's higher plane. Nonetheless, in moving towards secular society, giving into temptation or consciously desecrating moral codes of old, the fragile trial separation of intimacy and s*x increasingly coagulates. It is perhaps no coincidence that Bao Ninh's the Sorrow of War and Milan Kundera's The Unbearable Lightness of Being, both having been published in the last fifty years, present this separation. However, while Kundera seems content to describe without prejudice, Ninh's presentation of this separation shows fundamental moral disapproval, indicating the vital disparity that characterises the two texts. ...read more.

Tomas's l**t for carnal knowledge, however, can easily fuel a display of loveless s*x. As a scientist, his constant need for specifics and knowledge manifests itself in his spare time as his erotic friendships, giving him a key to understanding varied s****l response. Governed by rules, these affairs lack the capacity to develop any degree of love, for the battle is gratification and the war is knowledge. To win these both requires a merely physical connection and 'stipulates that he should exclude all love from his life'. Tomas is able to continue in this manner for years without undue stress, until such point as he meets Tereza. From this point, he can no longer view his mistresses equally as Tereza triumphs over them all. All his mistresses therefore 'become ripe for insurrection.' Immediately, this loveless s*x begins to crumble. Being neither an oversensitive man nor a romantic idealist, his propensity toward independent thought leaves him largely unable to take seriously the laws of romantic fidelity. Why should he eventually give up these s****l misadventures? It is perhaps a comment on the nature of the relationship between s*x and love that, despite consciously thinking 'attaching love to s*x [to be] one of the most bizarre ideas the Creator ever had,' he eventually succeeds in doing so as he grows to understand Tereza's point of view. ...read more.

Although the circumstances are different and Tomas and Tereza do not have to contest with the brutalities of war, the themes across the texts are not dissimilar. Both authors present a vision of s****l connection and sanctified love and compare and contrast the two. As all four relationships are forced to change, preventing them from continuing the separation, we see that Kundera and Ninh are in agreement that it is, if not impossible, certainly a challenging prospect, to separate the two. The major difference here comes from the authorial comment. While Kundera seems content to observe Tomas' philandering and Tereza's rhapsodising, Ninh's presentation is tinged with disapproval. We should note, thus, the circumstances that provoke the end. For Ninh, both relationships are unshakeably doomed, simply because he believes it to be necessary that love and s*x should be co-dependent. Kundera however indicates that while love and s*x can be discrete, it is impossible to have both without some confrontation. For harmony to be restored, a change must be made. The texts are written in different continents, decades and conditions, yet this acknowledgement that physical intimacy and romantic love cannot be separated creates links between the two texts, as the two writers nod to one another in accepting that, modern amorality forgotten , resistance is futile. ...read more.