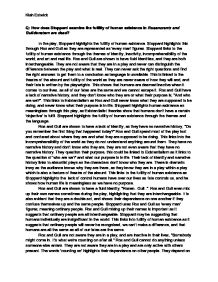 Futility of existence in Rosencrantz and Guildenstern are dead

Q: How does Stoppard examine the futility of human existence in Rosencrantz and Guildenstern are dead? In the play, Stoppard highlights the futility of human existence. Stoppard highlights this through Ros and Guil as they are represented as 'every man' figures. Stoppard links to the futility of human existence through the themes of identity, inactivity, incomprehensibility of the world, and art and real life. Ros and Guil are shown to have fluid identities, and they are both interchangeable. They are not aware that they are in a play and never can distinguish the difference between the play and what is real. They can never ask the right questions and find the right answers to get them to a conclusion as language is unreliable. This is linked to the theatre of the absurd and futility of the world as they are never aware of how they will end, and their fate is written by the playwrights. This shows that humans are deemed inactive when it comes to our lives, as all of our fates are the same and we cannot escape it. Ros and Guil have a lack of narrative history, and they don't know who they are or what their purpose is, "And who are we?". This links to Existentialism as Ros and Guil never know what they are supposed to be doing, and never know what their purpose is in life. ...read more.

This shows that humans cannot escape our fate because it is already determined. The coins that Ros and Guil are often seen flipping is a symbol for fate and chance. In the play when Ros uses the coin to try to cheer up Guil, by secretly holding coins in both hands represents fate, "Ros opens his hand to find a coin/Repeat/..Guil is getting tense. Desperate to lose." The fact that Ros was holding both coins in his hand all along represents how fate controls everything. No matter what Guil chose, it would always be the same. This is like their lives as no matter what decision they make, it is already predetermined, it will always end the same. In this case, no matter what they do, they will die in the end. This links to the futility of the world as it highlights the lack of control that humans have, and shows we cannot escape fate, we will die in the end despite any decisions we make. The word 'repeat' suggests that this is a routine and it is cyclical, humans are born and then they die. The words 'tense' and 'desperate' suggest that Guil is worried about these implications, and gives the audience an impression that maybe he has begun to realise he is in a play, or realise his fate and that he cannot escape from it. This can also suggest that if he loses then he could believe it is all chance, or believe he has some hope on escaping his fate. ...read more.

This suggests that if people concentrate and take control in their lives, they will get farther and get closer to a solution. This quote can also be seen as ironic. 'We must not lose control' can be seen as ironic as they don't have control over their lives, no matter what they do, their fates are already written, and even if they do understand what's going on around them, they cannot run away from their fate. This links into the futility of life as no matter what we do we will end the same. At the end of the play, there is no explanation of Ros and Guil's deaths, "They disappear". The play does not show or explain their deaths, they simply cease to exist, the audience only hears about it after. This can suggest their deaths weren't important enough to show, highlighting them as insignificant. This links to the futility of human existence as it suggests that people aren't important in this vast world. After the World War II when people lost faith in religion, they feared what came after death, or if there was anything at all. Stoppard highlights these fears, leaving questions unanswered about where we go after death and what is the purpose of life. Stoppard examines the futility of human existence through the themes of inactivity, lack of control, incomprehensibility of the world, and lack of identity. Stoppard highlights Ros and Guil's lack of control showing that humans have no control over their lives as everything is predetermined by fate, and he highlights human existence as meaningless as we have no purpose. Kiah Estwick ...read more.