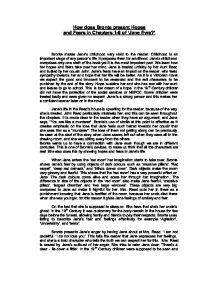 How does Bronte present Hopes and Fears in Chapters 1-9 of Jane Eyre?

How does Bronte present Hopes and Fears in Chapters 1-9 of 'Jane Eyre?' Bronte makes Jane's childhood very vivid to the reader. Childhood is an important stage of any person's life, it prepares them for adulthood. Jane's childhood comprises only one sixth of the book yet it is the most important part. We learn how her hopes and fears take over her mind. Jane is treated unfairly by her Aunt Reed and bullied by her cousin John. Jane's fears have an impact on the reader, who feels sympathy towards her and hope that her life will be better. As it is a Victorian novel we expect the good and innocent to be rewarded and the evil characters to be punished by the end of the story. Hope sustains her and she has row with her aunt and leaves to go to school. This is her dream of a hope. In the 19th Century children did not have the protection of the social services or NSPCC. Some children were treated badly and were given no respect. Jane is a strong person and this makes her a confident woman later on in the novel. Jane's life in the Reed's house is upsetting for the reader, because of the way she is treated. John Reed particularly mistreats her, and this can be seen throughout the chapters. ...read more.

'Of Mr. Reeds ghost', 'Nonsense' he says. Bronte uses dialogue to show the connection of friendship between Jane and Mr. Lloyd. Not only is it showing friendship it also shows trust. Jane can tell Mr. Lloyd her problems and he is happy to help her. Jane also has Bessie as a friend. Bessie helps her to get better when she was ill. Jane could relate to Bessie because she knew how mean Mrs Reed could be. Bessie and Mr. Lloyd feared for Jane's future. 'In the 19th Century child poverty was very serious due to the fact they had a fight for food and to stay alive. Diseases also used to spread easily due to poor hygiene. Mr. Lloyd encourages Jane to go to school where she meets Mr. Brocklehurst who is the headmaster of Lowood. The reader sees this as hope for Jane's future. Bronte describes Mr. Brocklehurst as a 'Black pillar', 'Harsh, and prim' and 'Grim faced'. Bronte describes him from Jane's view, using metaphors and listings like the above examples. Mr. Brocklehurst is not a 'Pillar', but he is tall. She is small and very imaginative, so the description of him from Jane's view is scary and exaggerated. Bronte makes him a believable character because he is a strict headmaster of a boarding school. Most boarding school headmasters are strict even in modern schools. ...read more.

Helen got in trouble. 'Burns returned to class carrying a bundle of twigs'. Children in the 19th Century used to get caned every time they did something wrong or when they were naughty. Jane gets angry because there was no need for Helen to get punished. 19th Century schools could be extremely unfair; many parents did not care if teacher's punished their children for no reason, as they simply did not know as they went to boarding school, also some children did not have parents like Jane. Every one Jane was close to died. Her parents died, her uncle died and Helen died. As a reader I felt sorry for her. She probably thought that she was the reason everyone died. Helen died from typhus; she was not the only child in Lowood School to die. Helen and Jane could relate to each other because they did not have anyone else to love them. 'I feared to find death'. Bronte creates tension by talking about Helen's death; the readers are agitated because they want to now if she is going to die. Overall I think that Bronte presents Jane's hopes and fears really well. This is because she makes the reader think they are part of the book ad that the characters are real, as well as sharing Jane's emotion. The reader can relate to Jane's life because Bronte conveys the 19th Century really well to the 21st Century readers. We see our lives are much better than Jane's but we are reminded, also that you should always be strong inside. ...read more.