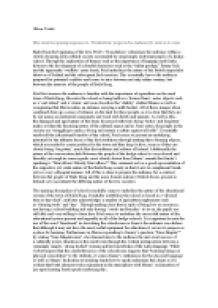 How does the opening sequence to Translations prepare the audience for what is to come?

﻿Oliver Towle How does the opening sequence to ?Translations? prepare the audience for what is to come Right from the beginning of the text, Friel?s ?Translations? submerges the audience within a slowly decaying Irish cultural society surrounded by surprisingly exuberant pupils of a hedge-school. Through his exploration of themes such as the importance of language and Gaelic history to the development of colourful characters such as the ?infant prodigy? Jimmy Jack and the apparently ?waiflike? mute Sarah, Friel underlines the nature of the British imperialist takeover of Ireland and the subsequent Irish reaction. This essentially leaves the audience prepared for potential conflicts and issues to arise between not only either country, but between the interests of the people of Baile Beag. Friel first ensures the audience is familiar with the importance of agriculture on the rural town of Baile Beag. He notes the school as being held in a ?disused barn?, notes objects such as a ?cart-wheel? and a ?churn? and soon describes the ?shabby? clothed Manus as well as recognising that Maire makes an entrance carrying a milk bucket. All of these images when combined draw up a sense of reliance on the land for these people, as it is clear that they are by not means an industrial community and work with fields and animals. ...read more.

If the hedge schools are not continued which is likely as a result of British influence, preserving the essence of Irish culture will become much more difficult as Irish mythology would no longer be taught in a British environment, and thus the audience is presented with the potential for decay within this area of Irish society. As well as this, all throughout the passage are references to Irish place names such as ?Poll na gCaorach? ?Cnoc na Mona? and ?Tor?, which all prove familiar to those in the schoolroom so to suggest a sense of significance within them as it is apparent that the history and stories that stand with them allow Irish people of all ages, from Jimmy to Sarah, to know where they are and the importance of them, such as everyone?s familiarity with ?Tor? and its residents. The British equivalent of some of these names would ultimately lack the sentimentality that comes with them, and so it is suggested that it is this sense of Irish pride that is endangered as the British begin to map certain areas of Ireland. Mazzara argues that ?Translations? is inextricably related to the question of power and, specifically, the power of naming oneself.? Such a remark links to Britain?s mapping of Ireland and the subsequent masking of its identity in that there is clear backlash from the Irish for changing their place names to the British equivalents. ...read more.

Manus speaks extensively to Maire in this opening sequence, only for her to be frequently dismissive in stating things such as ?doesn?t matter? and ?that?s better? which seems to present the audience with the idea that sometimes words cannot achieve the affection that gestures can as in spite of all Manus? attempts to win her over, Maire does not seem particularly interested in what he has to say and chooses to go with the gesture-oriented and English speaking Yolland. An analysis of the opening sequence of the play proves very effective in understand the nature of conflicts that follow. The interactions between characters including Manus and Sarah, and Doalty and Bridget set the foundation for the key themes of the play and in equating these characters to the themes; the audience is better able to recognise their development through the play. Ultimately by the end of the first twenty pages of the script, the audience should be almost completely aware of the increasing tension between the British and the Irish, as well as the potential misfortunes that may accompany the residents of Baile Beag. Reference: Mazzara F. The Challenge of Translating Brian Friel?s Translations 2003 Litvack L. The Historical and Colonial Context of Brian Friel University of Belfast Jones N. Translations, a Faber critical guide Brannigan J. York Notes Advanced ...read more.