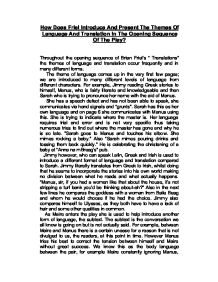 How Does Friel Introduce And Present The Themes Of Language And Translation In The Opening Sequence Of The Play?

How Does Friel Introduce And Present The Themes Of Language And Translation In The Opening Sequence Of The Play? Throughout the opening sequence of Brian Friel's " Translations" the themes of language and translation occur frequently and in many different forms. The theme of language comes up in the very first few pages; we are introduced to many different levels of language from different characters. For example, Jimmy reading Greek stories to himself, Manus, who is fairly literate and knowledgeable and then Sarah who is trying to pronounce her name with the aid of Manus. She has a speech defect and has not been able to speak, she communicates via hand signals and "grunts". ...read more.

Jimmy however, who can speak Latin, Greek and Irish is used to introduce a different format of language and translation compared to Sarah. Jimmy literally translates from Greek to Irish, whilst doing that he seems to incorporate the stories into his own world making no division between what he reads and what actually happens. "Manus, sir, if you had a women like that about the house, it's not stripping a turf bank you'd be thinking about-eh?" Also in the next few lines he compares the goddess with a woman from Baile Beag and whom he would choose if he had the choice. Jimmy also compares himself to Ulysses, as they both have to have a lack of hair and some other qualities in common. ...read more.

However Manus tries his best to correct the tension between himself and Maire without great success. We know this as the body language between the pair, for example Maire constantly ignoring Manus, possible flirting with Jimmy and dismissive conversation or the lack of it between them. This suggests some kind of relationship between Manus and Maire or past relationship. Many different forms of communicating appear in this play, as there is a different kind of relationship between each character and another. For example Maire seems to control the conversation between her and Manus whereas he seems patronising and slightly controlling towards Sarah. There are many different relationships like these throughout the first sequence. All the way through this first sequence there are different forms of language and translation presented to the audience. They come in many different varieties, some more subtly than others. ...read more.