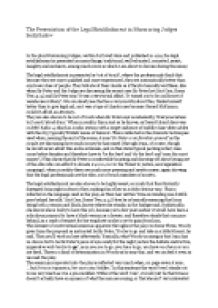 The Presentation of the Legal Establishment in &quot;Murmuring Judges&quot; by David Hare.

﻿The Presentation of the Legal Establishment in Murmuring Judges Becky Barlow In the play Murmuring Judges, written by David Hare and published in 1991, the legal establishment is presented as many things; traditional, well-educated, conceited, sexist, haughty and exclusive, among much more in which I am about to discuss during this essay. The legal establishment is presented as ?out of touch?, where the professionals think that because they are more qualified and more experienced, they are automatically better than any lower class of people. They talk about their clients as if they?re basically worthless, like when Sir Peter and the Judge are discussing the recent case Sir Peter lost (Act One, Scene Two, p.3.) and Sir Peter says ?It was a very trivial affair?, ?It turned out to be a silly sort of warehouse robbery?. We can clearly see that he is very snobby about this, thinks himself better than to give legal aid, as it was a type of charity case because Gerard McKinnon couldn?t afford an attorney. They are also shown to be out of touch when Sir Peter says nonchalantly, ?Everyone listens to Desert Island discs.? When in reality, this is just as he knows, as Desert Island discs was ...read more.

Without the word ?own?, it could just be that Irina is doesn?t actually have an opinion of what the men are saying, or that she isn?t very interested in what they have to say, but the use of the word ?own? shows that she in fact isn?t really allowed to have her own opinion, that if she did show her true feelings, she?d probably be shot down by the men, who would gang up on her. It shows that Irina knows her place in the business, and knows to keep schtum. Throughout the play, it is incredibly obvious that the legal establishment are very traditional and accustomed to the ways they have done their jobs. The establishment have known and grown to believe this is how things always have been, and most likely always will be. There are many examples I could pick out of language reflecting the word ?traditional?, but just one would be again in Act One, Scene Two, p.6., where Sir Peter recites to Cuddeford the story of Irina turning up to court in a ?rather brilliant green dress?, to which Cuddeford replies, ?Green? ...read more.

In Murmuring Judges, practically all of the lawyers we meet are either rich or very well-off. A very obvious example of this is where, in Act One, Scene Two, Sir Peter, Cuddeford and Irina are discussing how Irina (at the expense of Sir Peter) has been raising money for a campaign they are interested in starting. Sir Peter says, ?We started fund-raising for a campaign about four days ago.? And Cuddeford replies with, ?How much have you raised?? to which Irina simply states, ?One million.? Which is a pretty impressive feat in just four days, leading us to believe that our theory of all the solicitors, barristers and judges are indeed, very comfortably wealthy. Our theory is then backed up when, on the next page, Cuddeford says in a ?thoughtful? tone, ?Has anyone refused??. To which, again, Irina replies, with ?No. No one.? Obviously she is a very good fundraiser, and has been very fortunate to have raised so much, as Cuddeford says ?Remarkable.? The descriptions of these characters also show that they are most likely very rich as they say that Portrayed shown to be presented seen as ...read more.