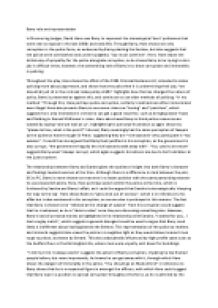 In Murmuring Judges, David Hare uses Barry to represent the stereotypical bent policemen that were seen as typical in the late 1980s and early 90s

﻿Barry role and representation In Murmuring Judges, David Hare uses Barry to represent the stereotypical ?bent? policemen that were seen as typical in the late 1980s and early 90s. Through Barry, Hare shows not only corruption in the police force, as evidenced by Barry planting the Semtex, but also suggests that the police were overworked and under budgeted, ?too much overtime?. Here, Hare shows the dichotomy of sympathy for the police alongside corruption, as he shows Barry to be trying to do is job in difficult times, however, the overarching role of Barry is to show corruption and immorality in policing. Throughout the play, Hare shows the effect of the 1984 Criminal Evidence Act, intended to make policing more about paperwork, and shows how the police feel it is undermining their job; ?we should all just sit in the nick and make policy drafts? highlights how this has changed the nature of policy. Barry is presented as against this, and continues to use older methods of policing, ?It? my method.? Through this, Hare portrays police corruption, as Barry?s methods are often immoral and even illegal. ...read more.

This representation of the police as reckless and immoral suggests Hare views the police in a negative light as they would allow innocent men to go to prison, as shown by Gerard. This was undoubtedly influenced by high profile cases such as the Guilford Four or the Birmingham Six, where men were unjustly sent down for bombings. ?I did my trick. It always works? suggests the extent of Barry corruption, implying he has framed people before, but more importantly, he knows he can get away with it, through which Hare shows the dangers of immorality in the police. ?You should go on Mastermind? in reference to Barry shows that he is a respected figure in amongst the officers, with which Hare could suggest that Barry was in a position to spread corruption throughout the force, as he is admired by the lower ranks. Hare uses this again to highlight the danger of immorality and corruption in the police. Earlier, Barry is also presented as part of the ?boys club?, as Hare shows banter between the male officers, ?I was conducting an interview? with the barmaid? horizontally?, suggesting that Barry is one of the ?lads?. ...read more.

Hare shows this to be wrong through his portrayal of Gerard, who is hugely different from the stereotype of a criminal. To a lesser extent, police corruption is also shown by Barry?s treatment of Keith, as Barry is suggested to have ?promised him a caution? suggesting Barry was using bribery to get Keith to cooperate. Overall, despite the suggestion of sympathy for Barry as someone trying to do a difficult job, Barry is largely presented as everything Hare dislikes about the police, as he is shown to be r****t, corrupt, immoral and misogynistic. Hare uses Barry as an example of wider police corruption, suggesting that Barry isn?t an isolated case but the whole system is corrupt. Barry is juxtaposed against Sandra who is shown to be conscientious and willing to make a difference. However, Hare presents all characters trying to make the system better as isolated and seen as inferior, as shown with Irina, whilst Barry is shown as ?one of the boys?, overall suggesting that people like Barry will ultimately continue with ?their method? whilst Sandra and such will fail to make a difference. This representation is shown to be the worn outcome for Hare, who is a supporter of change but this represents the reality of policing at the time. ...read more.