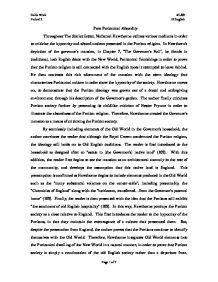 Pure Puritanical Absurdity Throughout The Scarlet Letter, Nathaniel Hawthorne utilizes various mediums in order to criticize the hypocrisy and absurd notions presented in the Puritan religion. In Hawthorn's depiction of the governor's mansion, in Chapter 7, "The Governor's Hall", he blends in traditional, lush English d�cor with the New World, Puritanical furnishings in order to prove that the Puritan religion is still connected with the English roots it attempted to leave behind. He then contrasts this rich adornment of the mansion with the stern ideology that characterizes Puritanical culture in order show the hypocrisy of the society. Hawthorne moves on, to demonstrate that the Puritan ideology was grown out of a brutal and unforgiving environment, through his description of the Governor's garden. The author finally criticizes Puritan society further by presenting its childlike criticism of Hester Prynne in order to illustrate the absurdness of the Puritan religion. Therefore, Hawthorne created the Governor's mansion as a means of criticizing the Puritan society. By seamlessly including elements of the Old World in the Governor's household, the author convinces the reader that although the Royal Crown condemned the Puritan religion, the ideology still holds on to Old English traditions. The reader is first introduced to the household as designed after an "estate in [the Governor's] native land" (105). ...read more.

This exaggerated "look of naughty merriment" upon Pearl's face is often associated with na�ve, yet cruel, childlike humor, which in this case is being used by Hawthorne to criticize the attitude of the New England society. Therefore, the author creates the reflective armor in order to show the na�ve, childlike cruelty of the Puritan society, and its inability to see the true individual, due to its exaggeration of sin and its implications. To conclude, Hawthorne creates the scene inside the Governor's mansion for the purpose of expressing his condemnation of the Puritan society. Within the passage, he criticizes not only the hypocrisy of the Puritanical lifestyle, but also its harsh and dry roots, which gives its supporters no solace in their lives. Hawthorne then moves on to denounce the Puritan's immaturity in their judgment of each other, seeing only the sin in their lives, and not the genuine soul of the individual. Therefore, the Governor's mansion is an example of just one of the means by which Hawthorn expresses his vexation with the Puritan community, and their attempt at a "utopian" society. Passage: The Governor's Mansion "So the mother and little Pearl were admitted into the hall of entrance. With many variations suggested by the nature of his building-materials, diversity of climate, and a different mode of social life, Governor Bellingham had planned his new habitation after the residences of gentlemen of fair estate in his native land. ...read more.

Cabbages grew in plain sight; and a pumpkin vine, rooted at some distance, and run across the intervening space and deposited one of its gigantic products directly beneath the hall window; as if to warn the Governor that this great lump of vegetable gold was as rich an ornament as New England earth would offer him. There were a few rosebushes, however, and a number of apple trees probably the descendants of those planted by the Reverend Mr. Blackstone, the first settler of the peninsula, and half-mythological personage, who rides through our early annals seated on the back of a bull. Pearl, seeing the rosebushes, began to cry for a red rose, and would not be pacified. 'Hush, child, hush!' said her mother, earnestly. 'Do not cry, dear little Pearl! I hear voices in the garden. The Governor is coming, and gentlemen along with him' In fact, adown the vistas of the garden avenue a number of persons were seen approaching towards the house. Pearl, in utter scorn of her mother's attempt to quit her, gave an eldritch scream and then became silent; not from any notion of obedience, but because the quick and mobile curiosity of her disposition was excited by the appearance of these new personages. ...read more.