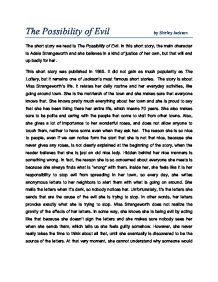 The short story we read is The Possibility of Evil. In this short story, the main character is Adela Strangeworth and she believes in a kind of justice of her own, but that will end up badly for her.

The Possibility of Evil by Shirley Jackson The short story we read is The Possibility of Evil. In this short story, the main character is Adela Strangeworth and she believes in a kind of justice of her own, but that will end up badly for her. This short story was published in 1965. It did not gain as much popularity as The Lottery, but it remains one of Jackson's most famous short stories. The story is about Miss Strangeworth's life. It relates her daily routine and her everyday activities, like going around town. She is the matriarch of the town and she makes sure that everyone knows that. She knows pretty much everything about her town and she is proud to say that she has been living there her entire life, which means 70 years. She also makes sure to be polite and caring with the people that come to visit from other towns. Also, she gives a lot of importance to her wonderful roses, and does not allow anyone to touch them, neither to have some even when they ask her. The reason she is so nice to people, even if we can notice form the start that she is not that nice, because ...read more.

She always goes to the post office at dusk where there are not too many people around. The climax of the story is when she goes to the post office to mail her letters of the day and while she puts her letters into the slot, one of them drops out of it. The Harris boy, who was close, picks up the letter and calls out to Miss Strangeworth, which he saw mailing the letters, but the lady does not hear him. Finally, the conclusion of the story is when Miss Strangeworth finds the letter she had lost the day before, on the floor in her hallway. At that moment, she knows something is wrong and she unfolds the paper to read it. She begins to cry silently when she reads the following words: Look out at what used to be your roses. Shirley Jackson used a few figures of speech in the short story we studied. Her subtle style of writing makes the reader want to read the story again to understand even more of the second degree meanings. We experienced it because we understood more of the details when we read the story a second and a third time. ...read more.

The moral of the story would then be to be very careful with what you see because what it on the outside sometimes disguises what is on the inside. We appreciated this short story a lot for a few different reasons. First of all, we remember studying short stories in High School and we had 5 criteria to rate a short story. It depended on how close it was to reality, on its length, on the amount of details, on the punch and on the vagueness of it. Considering those criterias, we concluded that Shirley Jackson's short story is very good. It's not too far from reality, because it's not fiction and not exaggerated, and also, this story could happen to any of us, only, a bit differently according to our daily lives. Also, it's not too long and the details are all important, nothing superfluous. The punch is great because you don't expect what will happen at the end and the metaphors make the story a little vague, which makes it interesting to read because you can imagine a part of it. Overall, we really appreciated Shirley Jackson's writing style and the whole short story we studied because we think she brings up life issues in a brilliant way, by making stories out of it. ?? ?? ?? ?? ...read more.