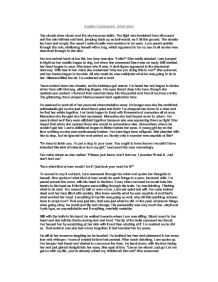 English Coursework - Short Story The clouds drew closer and the sky became duller. The light was banished from all around and the rain fell fast and hard, jumping back up as ball would, as it hit the ground. The streets lay bare and empty; the usual London bustle was nowhere to be seen. Lara paced quickly through the rain, sheltering herself with a bag, which appeared to be no use at all as she was drenched through to the skin. As Lara arrived back at her flat, her door was ajar. "Hello?" She warily shouted. Lara jumped in fright as her mobile began to ring, but when she answered there was no reply. Still startled, her heart began to race. She knew who it was. A dark figure appeared in the shadowed doorway. With fear in her voice she exclaimed "why are you doing this to me?" She quivered, and her hands began to tremble. All she could do was anticipate what he was going to do to her. Silenced filled the air. He muttered not a word. Tears rushed down her cheeks, as his footsteps got nearer. He faced her and began to stroke at her face with his long, withering fingers. ...read more.

Her eyes looked dead and her face filled with anxiety. She knew exactly what he was capable of and that's what worried her most. Everything in her life was going so well, why did this seething volcano have to erupt now? That was just him, that was just what he did. In the past, whenever things were going okay, he would just flip and change. His personality was very much the Jekyll and Hyde type, so unpredictable and if anything, mentally unstable. Still with the knife in his hand, he walked towards where Lara was sitting. Blood raced to her heart and she felt the thuds coming fast and hard. The tip of the knife caressed her throat. Her teased her by scratching at her skin with it and then stroking at it. He smirked as he did so. That smirk is one she had never forgotten; it had haunted her for years. He slit at her forearms laughing as he taunted. He loathed her fear and pleasured in her every tear and whimper. Hours of mental torture had passed. After much debating, Lara spoke up. Her temper had flared and started to overcome the dear. He leant down, with his face facing her and just glared straight into her eyes. She spat at him. "Leave me alone! Just go! ...read more.

She had urged to do this for so long but always felt so powerless in his company. She started to tell herself that she could overpower him and that she had got it in her to do so. She tugged at the knife so hard that the blood was oozing from her palm. She felt no pain. It all happened so fast. She had pushed him down and finally managed to get hold of the knife. All of the hatred and passion that she felt for him started to fire up. Adrenaline shot through her veins as she began to continuously thrust the knife into his body. He screamed at her to stop and apologised for all of his wrong doings, but her sudden power seemed invincible. It was almost as if she was possessed. "What have I done?" Cried Lara, everything was silent except for the echoes from her cries. He lay there still. She was scared, too scared to check if he was still alive. Blood began to form a circle around his body. The scene was horrific. She didn't know what to do, and in distorted frame of mind she ran out of the flat. It was only a matter of time until her consciousness would kick in. Word Count: 1,306 ...read more.