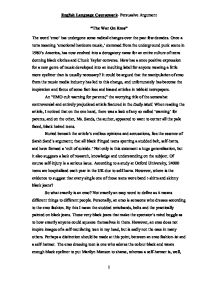 The War on Emo

"The War On Emo" The word 'emo' has undergone some radical changes over the past few decades. Once a term meaning 'emotional hardcore music,' stemmed from the underground punk scene in 1980's America, has now evolved into a derogatory name for an entire culture of teens donning black clothes and Chuck Taylor converse. How has a once positive expression for a new genre of music developed into an insulting label for anyone wearing a little more eyeliner than is usually necessary? It could be argued that the manipulation of emo from the music media industry has led to this change, and unfortunately has become the inspiration and focus of some fact-less and biased articles in tabloid newspapers. An "EMO cult warning for parents;" the worrying title of the somewhat controversial and entirely prejudiced article featured in the Daily Mail. When reading the article, I noticed that on the one hand, there was a lack of any so called 'warning' for parents, and on the other, Ms. Sands, the author, appeared to want to corner all the pale faced, black haired teens. Buried beneath the article's endless opinions and accusations, lies the essence of Sarah Sand's argument; that all black fringed teens sporting a studded belt, self-harm, and have formed a 'cult of suicide.' ...read more.

Granted, there are some teens who do discuss their injuries with others on the internet, but Ms. Sands seems to have wrongly assumed that all teens whose wardrobe consists solely of black are self-harmers. This is best shown by a young girl who I recently spoke to about this particular subject. She shows all the classic characteristics of your stereotypical emo; the black straightened hair, the fringe covering one heavily mascara-ed eye, the absence of anything closely resembling colour, and of course those crucial converse. However, there are no knife scars marking her arms, and she appears quite content. She tells me she is happy and has never even considered self-harming. Her 'emo' dress sense seems to be more linked to fashion than depression. This would seem to contradict Sand's ideas of the self-harming teens, that being that they are all emo. I am not suggesting that there are no people who dress according to the 'emo' fashion who do not self-harm, I am simply saying that it is unreasonable to assume that all self-harmers are emo. It seems the 'emo fashion' and self-injuring teenagers have unfortunately been mixed together, and caused uninformed journalists to launch attacks on both kinds of teens. ...read more.

However, people generally associate emos as being self-injurers, which of course in some cases is true, but not all. Regrettably, Sarah Sands article has only helped to fuel this misinterpretation. On the one hand, there are websites dedicated to discussing self-injury, and yes, some teenagers do use these sites, however, it is incredibly discriminatory to imply that all 'emos' do so. Emo as a fashion has been promoted among clothes retailers, but that does not mean that the industry encourages teens to self-harm. The emo fashion and people who suffer from depression are two separate entities, yet they have become linked, forcing people to associate one with the other. A biased and unfounded attack on a group of teenagers, who more than likely resort to being, what most people would call an 'emo' in order to find an outlet for their aggravation, does not help matters. If these people really are self-harming, shouldn't we be finding ways to help rather than backing them into a corner? Instead of launching unsupported assaults on the 'outsiders,' we should be attempting to give them the help and support they need. If their self-harming is really a cry for help, then we cannot turn our backs and ignore them when they need us most. Word Count: 1226 English Language Coursework- Persuasive Argument 1 ...read more.