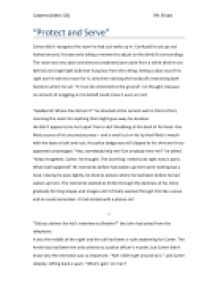 ﻿Cameron Jukes 12Q Mr. Evans ?Protect and Serve? ________________ Carter didn?t recognize the room he had just woke up in. Confused he sat up and looked around, his eyes only taking a moment to adjust to the dimly lit surroundings. The room was very plain and almost completely bare aside from a white desk he sat behind and single light bulb that hung low from the ceiling. Seeing a door out of his right eye he went to move for it, only then noticing the handcuffs restraining both hands to where he sat. ?It must be cemented to the ground?, he thought, because no amount of wriggling on his behalf could move it even an inch. ?Goddamit! Where the hell am I?? he shouted at the cement wall in front of him, scanning the room for anything that might give away his location. He didn?t appear to be hurt apart from a dull throbbing at the back of his head ?the likely source of his unconsciousness ? and a small cut on his lip that filled is mouth with the taste of salt and rust. His police badge was still clipped to his shirt and it too appeared undamaged. ?Hey, somebody help me! Can anybody here me!? he yelled. ?Keep it together, Carter, he thought. The last thing I need to do right now is panic. What had happened? His memories before had woken up here were nothing but a haze. ...read more.

He did his best to keep his composure. ?It?s called a ?picana? and it can deliver twelve thousand volts of electricity?, explained Schaefer. ?It is very painful, you can trust me on that, so just tell me where he is so we don?t have be unpleasant.? Carter said nothing, instead looked him straight in the eyes, noticing that Schaefer failed to meet his gaze. ?Lost the meaning, did you, Paul?? said Carter. ?What,? responded Schaefer. ?Isn't that what you used to say about dirty cops?? explained Carter. Somewhere along the way they lost the meaning? John told me about it. He also told me that you taught him everything about being a cop. I guess you can?t teach someone how to be a scumbag.? In that instant, Schaefer could see Book sitting in front of him and he was brought back ten years when John had been fresh out of the academy and where he still lived for the law. But those days were over. Schaefer leaned over the desk towards Carter until his face was only a foot away, blocking out the light, so that Carter could see every wrinkle on his aging face. ?You can, believe what you like about your precious hero, John Book, but he?s no better than the rest of us.? This could be my chance thought Carter. He looked at Schaefer for a moment and then spat a round ball of saliva into his eye. ...read more.

1. Where have you used crosscutting and/ or flashback? The story starts off when Carter wakes up and realizes he has been captured. He then tries to remember what has happened the last few days and it flashes back to a phone call he had with Book. It then describes the events that lead up to him being captured and the cuts back into the scene in which he is captured. Schaefer has a brief cross-cut when he remember Book when he started on the force 1. Give examples of your use of pathetic fallacy. The room in which Carter is bare and dark, which shows the mood of that he is in at this point. When he is walking down the alley, it is cold and about to storm which is a foreshadowing that he is about to be captured but also shows the helplessness of his situation. 1. Have you settled on one incident or episode (see task options) in which flashbacks are used, including one or more voices conveyed by reported thinking or by direct quotation? Yes I decided to insert a episode in which the murder of Carter takes place. I use the reported thought of Carter and Schaefer as well as the dialogue of Carter, Book and Schaefer. 1. Did you unify the parts of the story by motif, symbol, event or juxtaposition? The symbol of the police badge and the motif of the police motto, ?protect and serve?, run through the story. There is also a constant juxtaposition of light and darkness in respect to the good and bad cops. ...read more.