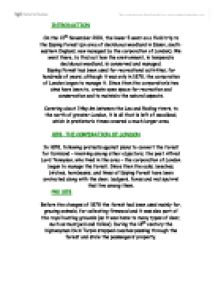 INTRODUCTION On the 13th November 2001, the lower 5 went on a field trip to the Epping Forest (an area of deciduous woodland in Essex, south-eastern England, now managed by the corporation of London). We went there, to find out how the environment, in temperate deciduous woodland, is conserved and managed. Epping Forest has been used for recreational activities, for hundreds of years, although it was only in 1878, the corporation of London began to manage it. Since then the corporation's two aims have been to, create open space for recreation and conservation and to maintain the natural aspects. Covering about 24sq km between the Lea and Roding rivers, to the north of greater London, it is all that is left of woodland, which in prehistoric times covered a much larger area. 1878- THE CORPERATION OF LONDON In 1878, following protests against plans to convert the forest for farmland - involving among other objectors, the poet Alfred Lord Tennyson, who lived in the area - the corporation of London began to manage the forest. Since then the oaks, beeches, birches, hornbeams, and limes of Epping Forest have been protected along with the deer, badgers, foxes and red squirrel that live among them. PRE 1878 Before the changes of 1878 the forest had been used mainly for, grazing animals, for collecting firewood and it was also part of the royal hunting grounds (as it was home to many types of deer, such as muntjack and fallow). ...read more.

However until the early 1900's the pub had been on the green and had used it for a cricket pitch. It was soon after the trees had been cut down to accommodate the pitch that people realised that rare plants were growing in the grass. When they realised this, the corporation of London, decided to stop the people from playing cricket on the green as they were trampling the plants. Ever since then the trees have been kept down to let the sun reach the plants. The green is also home to many ants. All over the grass there are anthills. From these maps you can see how the forest has been changed. HYPOTHESIS * Is car pollution more obvious in site 1, than in site 2? We chose this to see which part of the forest is affected more by car pollution. From this pie chart we already know that over 75? of visitors travel to the forest by car. * Is there more erosion in site 1, than in site 2? We chose this to see if there was a link between the amount of erosion and the amount of attractions. * Is difference in diversity of species is higher at site 2, than at site 1? We chose this to see if there was any point to all the conservation precautions at site 2. ...read more.