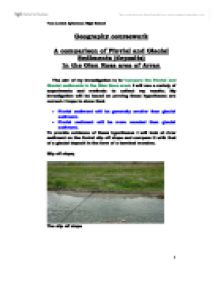 A comparison of Fluvial and Glacial Sediments (deposits) In the Glen Rosa area of Arran.

Geography coursework A comparison of Fluvial and Glacial Sediments (deposits) In the Glen Rosa area of Arran The aim of my investigation is to 'compare the Fluvial and Glacial sediments in the Glen Rosa area'. I will use a variety of experiments and methods to collect my results. My investigation will be based on proving these hypotheses are correct. I hope to show that: * Fluvial sediment will be generally smaller than glacial sediment. * Fluvial sediment will be more rounded than glacial sediment. To provide evidence of these hypotheses I will look at river sediment on the fluvial slip off slope and compare it with that of a glacial deposit in the form of a terminal moraine. Slip off slope; The slip off slope Terminal moraine; I will also be considering; The difference in B Axis length, Roundness, Sediment composition and Sorting. I expect the glacial deposits to be more angular than that of the fluvial deposits because the rate of erosion is different. In fluvial erosion the rocks are in constant erosion from frequently colliding (attrition) with other rock material. I would expect more edges of the rock to be rounded because the chances are they would have been knocked off. ...read more.

I will measure orientation by - locating the b axis and using the compass clinometer I will measure the orientation. I will measure the length of the B axis by - using callipers and reading off the rule. I will collect 10 (20 if possible) readings from each site to give me a suitable range of results. The locations I have chosen are highlighted on the map and the grid references are below: The terminal moraine - 987 382 The slip off slope - 987 383 I will record my results on the attached sheet. I will present my evidence as a range of graphs with attached section on collecting recording and presenting evidence. Stage 2 collecting, recording and presenting evidence. On the Day when we travelled to these two grid references the terminal moraine on 987 382 and the slip off slope on 987 383, I worked with 2 other people to obtain evidence/results for my investigation, they were Matthew Cruse and Lawrence Card. This was the original plan for the results table we were going to use. However during collecting the evidence our group decided we could double the amount of our results in ample time. ...read more.

I believed the glacier to be more randomised where as the fluvial to be more sorted. Evaluation We had a few problems during this investigation many of them minor, but a few were major. For example, since we did not have any artificial light and light throughout the day was fading we may have made a few mistakes on measurements, this may be a reason for some if not all of the anomalous points. One person in my group noted all of the data down on the day so we could have misjudged his handwriting and could have written variable data. Below is a simple diagram of some of our problems: The Main weaknesses and faults. The main weaknesses during my investigation were the lack of conclusive results as shown in the graphs. However this could be rectified by using secondary data, such as maps, other people's results as shown during my project shown after this page. As always any investigation can be improved by the quantity of evidence, and also the quantity. If I could obtain more evidence from different locations, i.e. not just from Glen Rosa it would provide a much better supporting structure for my predictions. Although this would involve thousands of pounds it would have a very accurate conclusion. ?? ?? ?? ?? Tom Levick Aylestone High School 1 ...read more.