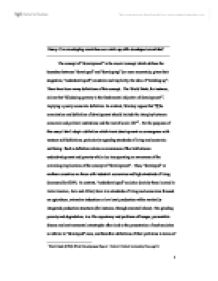 Can developing countries ever catch up with developed countries

Essay: Can developing countries ever catch up with developed countries? The concept of "development" is the crucial concept which defines the boundary between "developed" and "developing" (or more accurately, given their stagnation, "underdeveloped") countries and implicitly, the idea of "catching up". There have been many definitions of this concept. The World Bank, for instance, claims that "[r]educing poverty is the fundamental objective of development"1, implying a purely economic definition. In contrast, Worsley argues that "[t]he examination and definition of development should include the interplay between economic and political institutions and the rest of social life"2. For the purposes of this essay I shall adopt a definition which treats development as convergence with western self-definitions, particularly regarding standards of living and economic wellbeing. Such a definition retains an awareness of the link between underdevelopment and poverty while also incorporating an awareness of the colonising implications of the concept of "development". Thus, "developed" or northern countries are those with industrial economies and high standards of living (measured by GDP). In contrast, "underdeveloped" societies (mainly those located in Latin America, Asia and Africa) have low standards of living and economies focused on agriculture, extractive industries or low-level production within vertically-integrated production structures (for instance, through sweated labour). The grinding poverty and degradation, low life expectancy and problems of hunger, preventable disease and environmental catastrophe often lead to the presentation of such societies as inferior to "developed" ones, and therefore definitions of their problems in terms of their "failure" to "develop". "Development", then, involves "underdeveloped" societies solving their pervasive problems by becoming more like "developed" societies. Wide economic disparities exist between the developed and the developing states. For example, the per capita GDP of the United States is $37,600 compared to Colombia which has a per capita GDP of $6,500 and East Timor which has a meagre $5003. How, then, should the problem of underdevelopment be contextualised and analysed within the discipline of International Relations? ...read more.

Instead, interactions within the world system, from world trade patterns to wars, express dynamic core/periphery relations through which western elites impose their control. By thinking of underdevelopment in terms of global structures entwining across developed and underdeveloped alike, they question the idea that development can occur aside from broader challenges to global capitalism. World trade is a prime example. If there is to be a "catch-up", underdeveloped societies need economic growth and diversification. Gibson and Tsakalotos argue that "for a country to develop it needs access to capital in order to be able to invest"22. However, peripheral areas have little capital to invest and, since their commodities are often sold cheaply, capital cannot be accumulated through trade in international markets. Due in many cases to a history of colonial subordination, most underdeveloped societies are heavily dependent on the export of a small number of primary commodities, usually cash crops or extracted goods such as oil, gas, copper and gold. Such commodities are vulnerable to changes in world markets and are often undercut by unfair trading practices by northern corporations and governments. For example, northern states often place tariffs, quotas and restrictions on imports from the south, viewing these as "a threat to Western markets"23. The sugar trade is an instance of this. The European Union (EU) releases subsidies of "$1.6bn a year to the sugar barons in East Anglia and the Paris basin. This generates surpluses that deprive countries such as Thailand, Mozambique and Malawi of markets"24, which flood markets and push down prices, to the detriment of underdeveloped countries. A spokesman from Oxfam argues that "Mozambique loses almost as much as a result of EU sugar policy as it gets in European aid." 25 Similarly, in 2002 the US paid out "$3 billion in subsidies to cotton farmers. This is equivalent to 100% of the market value of cotton output"26. This seriously undermines West African cotton markets. ...read more.

Thirdly, the reproduction of the present resource-consumptive western model across the world is impossible for ecological reasons. This is not to rule out the possibility, once the present world system is overthrown, of constructing a world in which all are free from problems such as famine and preventable disease (i.e. what is sometimes termed "alternative" or "sustainable" development). It is simply to suggest that such a world would have to arise outside of the capitalist model, and therefore outside of the framework implicit in the ideas of "development" and "catching up". The answer to the question "can developing countries catch up?" is no, or at least, not in this present world system. The evidence makes clear that capitalism and the world system it creates are the causes of underdevelopment and the main barriers to development. The new class of entrepreneurs Rostow predicted would result from economic liberalisation has emerged only in the parodic form of comprador elite parasitic on FDI. The main effects of years of IMF restructuring have been greater poverty, the destruction of the social infrastructure and the emergence of a new "underclass" reliant on sweatshop labour and various shadowy survival strategies. Capitalism thrives on exploitation and a few get rich at the expense of the majority. The structure of the capitalist world system has allowed northern corporations to economically exploit the periphery, at the same time as spreading cultural domination. To treat this system of control and exploitation as if it were a case of comparing different states is to mistake a systematic process of resource extraction and violence for a simple comparative relationship between distinct entities. If modernisation theory were correct, statistics would show a trend towards a more egalitarian world in the context of widespread neo-liberal restructuring. In fact, the evidence is in the opposite direction, tending to confirm the suspicions of World Systems Theory and other critical approaches. Underdeveloped countries can never catch up with developed countries, because capitalism is arranged as a global system and depends on the reproduction of relations of dependency and structured underdevelopment. ...read more.