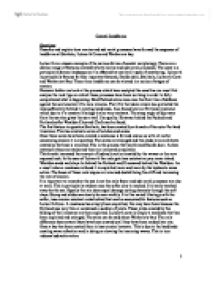 Describe and explain how marine and sub aerial processes have formed the sequence of landforms at Stairhole, Lulworth Cove and Warbarrow bay.

Coastal Landforms Questions Describe and explain how marine and sub aerial processes have formed the sequence of landforms at Stairhole, Lulworth Cove and Warbarrow bay. Lulworth is a classic example of the various forms of coastal morphology. There are a diverse range of features created by both marine and sub aerial processes. The coast is a particularly diverse landscape as it is effected by nearly all types of weathering. Lulworth is particularly famous for four important features, Durdle door, Stairhole, Lulworth Cove and Warbarrow Bay. These three landforms can be viewed in a series of stages of erosion. However before we look at the process which have sculpted the coastline we must first analyse the rock type on which these processes have been working in order to fully comprehend what is happening. ...read more.

However behind the Purbeck and Portland softer Wealden Clay and Chalk can be found. The first feature in question Stairhole, has been created by a breach of the outer Portland limestone. This has created a series of notches and caves. Once these caves have been created a weakness is formed and so as with all matter concerning erosion it is exploited. The caves are enlarged and this leads to an arch been created as the base is removed. This is the process that has formed Durdle door. Arches eventually become stacks and there are removed completely. This breach increased the amount of hydraulic action created by the waves on the now exposed rock. ...read more.

Equally the rain does equal damage cutting channels through the soft clays. Slump and slides can clearly be seen visibly. It is this varied lithology with the softer, less erosion resistant rocks behind that can be accounted for features such as Lulworth Cove. A weakness has simply been exploited, this may have been because the Portland was very thin or contained a number of joints. These joints created by the folding of the limestone are then exploited. Lulworth cove is simply a weakness that has been exploited and enlarged. The same can be said about Worbarrow bay. The only difference been several bays have been created until they have been eroded into one. Once a bay has been created there is less erosion however. This is due to the headlands creating wave refraction and in doing so slowing the incoming waves. This in turn reduces hydraulic action. 1 ...read more.