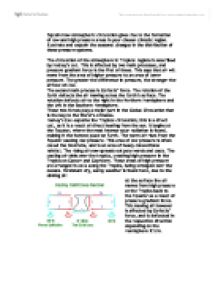 Explain how atmospheric circulation gives rise to the formation of low and high pressure areas in your chosen climatic region. Illustrate and explain the seasonal changes in the distribution of these pressure systems. The circulation of the atmosphere in Tropical regions is described by Hadley's cell. This is affected by two main processes, and pressure gradient force is the first of these. This says that air will move from the area of higher pressure to an area of lower pressure. The greater the difference in pressure, the stronger the airflow will be. The second main process is Coriollis' force. The rotation of the Earth deflects the air moving across the Earth's surface. The rotation deflects air to the right in the Northern Hemisphere and the left in the Southern Hemisphere. These two forces play a major part in the Global Circulation that is the key to the World's climates. Hadley's Cell explains the Tropical circulation; this is a direct cell, as it is a result of direct heating from the sun. ...read more.

Unlike Hadley's cell this refers to longitudinal movement of air, rather than latitudinal movement. In the South Pacific hot air rises over Indonesia giving heavy rainfall. On the other side of the Pacific Ocean on the West Coast of South America a cold ocean current maintains stable air and a large high pressure is kept even when the ITCZ is overhead. The difference in pressures across the ocean causes the rising air to move eastwards across the Pacific and then fall on the West coast of South America - intensifying the high pressure found there. At the surface the air moves back towards Indonesia as part of the South East trade winds. Walker's cell results in a west coast desert climate, with very hot summers and dry, warm winters giving droughts. This is caused by deep lows and the intense highs that develop over the continents, giving very stable air. This is can be dramatically altered however in an El Nino year. Around Christmas time in some years for a reason that is so far unknown, the water off Peru suddenly warms. ...read more.

The air moves from the high pressure to the low pressure at the ITCZ giving a North Easterly air flow, which is dry as it comes over the land. In summer however the air comes from the sea so it is wet. The sub tropical jet moves north of the Himalayas and the ITCZ follows the Zenithal sun towards the tropic of Cancer. Establishing air rising and low pressure. The air is pulled in towards an intense low pressure in the North West of the sub-continent. Air moves up from the high pressure cells in the Southern Hemisphere, becoming the South West Monsoon. They carry huge quantities of moisture, giving heavy thunderstorms and cause floods. The Tropics are areas that generally are hot all year as described by Hadley's cell. Although we must remember that within the Tropics seasonal changes occur in the circulation as the ITCZ moves to follow the Zenithal sun. Also tropical circulation is affected by Walker's cell and El Nino. Explain how atmospheric circulation gives rise to the formation of low and high pressure areas in your chosen climatic region. Illustrate and explain the seasonal changes in the distribution of these pressure systems. The Tropics Sarah Bennett ...read more.