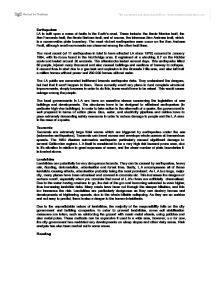 Earthquakes LA is built upon a mass of faults in the Earth's crust. These include: the Santa Monica fault, the San Fernando fault, the Santa Barbara fault, and of course, the infamous San Andreas fault, which is a conservative plate boundary. The most violent earthquakes seen occur on the San Andreas Fault, although small movements are observed among the other fault lines. The most recent (of 11 earthquakes in total to have affected LA since 1970) occurred in January 1994, with its focus found in the Northridge area. It registered at a shocking 6.7 on the Richter scale and lasted around 30 seconds. The aftershocks lasted several days. This earthquake killed 60 people, injured many thousand and also caused buildings and sections of freeway to collapse. It caused fires to start due to a gas leak and explosion in the Granada Hills area, and also left half a million homes without power and 200 000 homes without water. The LA public are somewhat indifferent towards earthquake risks. They understand the dangers, but feel that it won't happen to them. There currently aren't any plans to fund complete structural improvements, simply because in order to do this, taxes would have to be raised. This would cause outrage among the people. The local governments in LA are have an assertive stance concerning the legislation of new buildings and developments. ...read more.

Flooding The extreme winter storms bring unrelenting rain and very strong winds. These are especially severe during an El Nino event. Although most rivers in the L.A vicinity are short and seasonal, they can transport huge volumes of water and material during floods. Deforestation due to brush fires and urbanisation on the steep surrounding hillsides and valleys have increased surface runoff, as has the urbanisation in the city centre. Large dams have been built to try and combat this problem, but even so, the flood risk remains. The heavy rain can also cause problems with landslides. In February 1992, during an El Nino event, eight people died and 200 of cars and caravans were swept out to sea. Drought Due to such a high average annual temperature, L.A is very susceptible to drought. Almost every year there is a hosepipe ban, most notably in 2007, which was the driest year in over a century. The long dry summers associated with the Mediterranean climate puts extreme amounts of pressure on the already diminishing water supplies. Also, the decision of Arizona to withhold some runoff from the mountains has been devastating, because previously, Southern parts of California had been able to use the surplus from Arizona's requirements. L.A has one of the highest water consumption per capita rates in America, and this doesn't help matters. ...read more.

Crime is aggravated by the infamous strong gang culture found in L.A. During 1995 there was a partial truce, but it didn't include the entire city. In turn, drug related crime rates are high, particularly among the gangs. New approaches to crime have included the introduction of Community Support Officers. When these were introduced to the Anaheim district, they reduced crime by 21%. Some tougher policies against gang crime have had a positive effect, but the problem of funding these schemes is always present. Smog/Fog Fog can occur when the cool air from the offshore Californiadrifts inland where it meets warm air. It forms most afternoons between May and October, as the sea breeze increases.Warm air then becomes trapped under colds. Smog can be caused by the pollutants from LA's traffic, power stations, and industry when they are released in to the air. When they return to Earth, they cause acid rain. 1,130 tons of polluting gases, such as nitrous oxides, sulphur dioxides and hydrocarbons are released into L.A's atmosphere each day. New regulations have been recently introduced to reduce pollution. Some policies include to introduce strict emission levels for vehicles, power plants and industry in general. Businesses with over 50 employees have a legal responsibility to organise car pooling programmes. Catalytic convertors are mandatory on all cars, too. Interestingly, on the human side of things, according to a recent study reported in the Los Angeles Times, residents showed lung damage that might be expected of someone who smoked half a pack of cigarettes per day. ...read more.