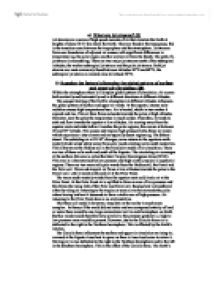 a) What are jet streams? (5) Jet streams are a series of high speed currents of air that circulate the Earth at heights of about 10-15 km above the Earth. They are found at the tropopause, this is the transition zone between the troposphere and the stratosphere. Jet streams form near boundaries of adjacent air masses with significant differences in temperature eg. the polar region and the warmer air from the South. The path of a jet stream is meandering. There are two major jet streams north of the subtropical latitudes, the weaker subtropical jet stream and the polar jet stream. Both jet streams are most commonly found between latitudes 30�N and 60�N, the subtropical jet stream is located close to latitude 30�N. b) Examine the factors influencing the global pattern of surface and upper air circulation (20) Within the atmosphere there is a complex global pattern of circulation. Air moves both vertically and horizontally and in different directions at different altitudes. The unequal heating of the Earth's atmosphere at different altitudes influences the global pattern of surface and upper air winds. At the equator, intense solar radiation causes high temperatures here. ...read more.

Air returning to the Polar Front does so as cold easterlies. This three cell model is however, simplistic as the reality is much more complex. In theory if the world did not rotate and was composed entirely of land or water there would be one large convectional cell in each hemisphere on Earth. Surface winds would therefore blow parallel to the pressure gradient i.e. high to low pressure areas would be present. However, due to the Coriolis force air is deflected to the right in the Northern hemisphere. This is affected by the Earth's rotation. The Coriolis force influences the surface and upper air circulation as rising air, warmed at the Equator loses heat to space as there is less cloud cover to retain it. Moving air is also deflected to the right in the Northern hemisphere and to the left in the Southern hemisphere. This is the effect of the Coriolis force. The Earth's rotation through 360� every 24 hours means that the wind blowing in a northerly direction in the northern hemisphere appears to have been diverted to the right. ...read more.

A polar jet stream is evident at the tropopause above the Polar Front and a sub tropical jet stream at about 25�-30� latitude also exists at the boundary between the Hadley and Ferrel cells. The winds in the upper troposphere do not flow in parallel lines around the Earth. Winds in the higher latitudes have a wave like pattern called Rossby waves. These waves change shape and wave length, creating a series of ridges and troughs. The movement of these Rossby waves and the polar front jet stream affects the weather in temperate latitudes. Settled conditions as well as changeable conditions are due to complex changes in the upper troposphere. The causes of Rossby wave patterns are not understood well although surface features eg. mountain ranges and oceans are thought to have an influence. In conclusion, factors such as Rossby waves, jet streams and the coriolis force all influence upper air circulation. These all deflect the wind from its original course if the Earth was perfectly smooth. On the surface pressure and friction from land results in winds being deflected. Therefore, surface and upper air circulation is never perfect as a number of factors influence the course and strength of the winds. ?? ?? ?? ?? ...read more.