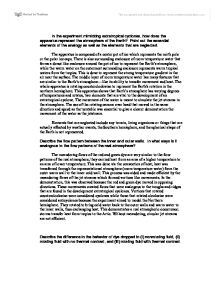 In the experiment mimicking extratropical cyclones, how does the apparatus represent the atmosphere of the Earth? Point out the essential elements of the analogy as well as the elements that are neglected.

In the experiment mimicking extratropical cyclones, how does the apparatus represent the atmosphere of the Earth? Point out the essential elements of the analogy as well as the elements that are neglected. The apparatus is composed of a center pot of ice which represents the north pole or the polar ice caps. There is also surrounding enclosure of room temperature water that forms a donut like enclosure around the pot of ice to represent the Earth's atmosphere, while the warm water on the outermost surrounding enclosure represents warm tropical waters from the tropics. This is done to represent the strong temperature gradient in the air near the surface. The middle layer of room temperature water has many features that are similar to the Earth's atmosphere-like its ability to transfer movement and heat. The whole apparatus is rotating counterclockwise to represent the Earth's rotation in the northern hemisphere. This apparatus shows that Earth's atmosphere has varying degrees of temperatures and rotates, two elements that are vital to the development of an extratropical cyclone. The movement of the water is meant to simulate the jet streams in the atmosphere. The use of the rotating camera over head that moved in the same direction and speed as the turntable was essential to give a clearer demonstration the movement of the water as the jetstream. ...read more.

Dye dropped in rotating fluid with no thermal contrast penetrated down to form a column. The dye did not spread horizontally as it just maintained vertical coherence. Food coloring is heavier than water thus it tends to sink downwards. This proves that an energy source for jet streams are temperature gradients. Potential energy lies in cold water that tends to sink and hot water that tends to rise. Dye in a rotating fluid with rotating fluid and thermal contrast will form vortices that represent meandering flows of the polar and subtropical jet streams in the Earth's atmosphere. The dyes moved in opposing directions in a vortex like shape/fashion of eachother. The dyes were used to trace the patterns of the flow. These flows can carry warm water towards the pot of ice which represents the transfer of heart from the tropics to the Artic. All three scenarios demonstrate that rotation and a temperature gradient are essential to the formation of extratropical cyclones. For the sink experiment, explain why the rotating case develops an intense vortex and the surface of water is severely depressed, whereas this doesn't happen in the non-rotating case? In what ways is the rotating case analogous to a hurricane? The spin of the vortex in the sink (and hurricane) ...read more.

In the non-rotating case, we did not observe swirling of dye around the sink. However, as long as the Earth underneath the tank is rotating (which it is), in principle it should be possible to observe a swirling motion in a similar experiment. How would you design an experiment to increase the chance to observe a swirling motion around a sink without rotating the tank or tweaking the shape of sink? It is within the realm of reason to design an experiment to observe the Coriolis effect. In order to do so, the draining of the sink must be drastically slowed down to the extent of where the Earth's rotation could have an effect on the water. In the demonstration in the lab, the sink water was drained too quickly. However, in hurricanes the Coriolis effect is obvious in the swirl because they last for several days to over a week. Since the Earth needs one day's time to make one rotation, then the Coriolis effect occurs with the earth's rotation. Therefore, the sink experiment must last for at least one rotation of the Earth (one day) in order to produce an observable effect. The specific design would include a very large tank of water with relatively small drain to let water out slowly. The water will continue to steadily drain for several days so the Earth has completed several revolutions also; hence, the swirl of the water would mimic that of hurricanes. ...read more.