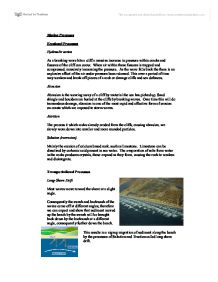 Marine Processes Erosional Processes Hydraulic action As a breaking wave hits a cliff a massive increase in pressure within cracks and fissures of the cliff can occur. When air within these fissures is trapped and compressed, massively increasing the pressure. As the wave falls back the there is an explosive effect of the air under pressure been released. This over a period of time may weaken and break off pieces of a rock or damage cliffs and sea defences. Abrasion Abrasion is the wearing away of a cliff by material the sea has picked up. Sand shingle and boulders are hurled at the cliffs by breaking waves. Over time this will do tremendous damage, abrasion is one of the most rapid and effective form of erosion on coasts which are exposed to storm waves. ...read more.

Consequently the swash and backwash of the waves come off at different angles; therefore we can expect and show that sediment moved up the beach by the swash will be brought back down by the backwash at a different angle, consequently further down the beach. This results in a zigzag migration of sediment along the beach by the processes of Saltation and Traction called long shore drift. Solution Limestone dissolved by carbonic acid in the seawater will me moved depending on where the wave travels to. Suspension Small particles of sand etc are carried along within the flow of the moving water. The material is likely to be the largest proportion of the sediment picked up by a breaking wave. ...read more.

Waves breaking directly at the foot of a cliff release far more energy than those breaking some distance away. Fetch How far wave has travelled determines the amount of energy collected. Sea Depth A steeply-shelving sea bed at the coast will create higher and steeper waves. Coastal Configuration Headlands attract wave energy through refraction. Beach Beaches absorb energy, lessoning the Erosional power of a breaking wave. Steep, narrow beaches easily dissipate the energy from flatter waves. Flattish, wider beaches spread out the incoming wave energy and are best at dissipating high and rapid wave inputs. Human Activity People may remove materials form the coastline (e.g. sand) increasing erosion. Sea defences built by humans may reduce erosion in one place only to increase it in another. Geology Some rocks are more resistant to erosion than others. ...read more.