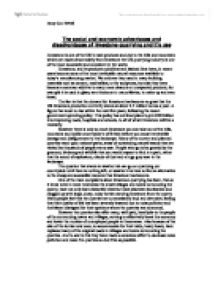 The social and economic advantages and disadvantages of limestone quarrying and it's use Limestone is one of the UK's main produces and due to the hills and mountains which are made almost solely from limestone the UK quarrying industry is one of the most successful and consistent in the world. Limestone, and its products quicklime and slacked lime have, in recent years become some of the most invaluable natural resources available to today's manufacturing market. Not only are they used in many building materials such as cement, road ballast, or for sculptures, but also they have become a common additive to many more obscure or unexpected products, for example it is used in glass; as a thickener in many fabrics; in make-up and even bread. The fact is that the demand for limestone has become so great that the UK limestone production currently stands at about 2.5 million tonnes a year. ...read more.

One of the main complaints about limestone quarrying has been, that as it tends to be in more rural areas the small villages and towns surrounding the quarry, have not only lost a beautiful view but have also been bombarded and clogged up with large, dusty, noisy lorries carrying limestone from the quarry. Many people feel that the quarries are unnecessarily loud and obtrusive, feeling that their quality of life has been severely lowered due to noise pollution and the blatant disregard for their opinions where the quarries are concerned. However the quarries also offer many, well paid, local jobs to the people of the surrounding towns and villages, serving to effectively boost the economy and lower the number of unemployed people in these areas. Also because of the size of the lorries new ones, to accommodate for their wide, heavy loads, have replaced many of the original roads in villages and towns surrounding the quarries. ...read more.

So that, therefore, eventually the purpose and need of limestone quarrying would be and could be, surpassed by the inevitable advances in our knowledge. And although this is not an immediate solution to a large problem facing us, we must bear in mind that if we were to suddenly eradicate it's use within companies products and projects we would face much more serious problems. Not only in the form of our economy, but also, in part, as consumers we would be suddenly deprived of many limestone based products. I therefore conclude my essay on this final note that although there is, at presents no immediate solution to the quarries. We must learn to realise that there is no alternative at the moment, and people who are apposed should see through their naivety and realise that a quarry is not a permanent fixture and that if it is not within sight of their village then it will be in sight of another. Daisy Cox 10PDS ...read more.