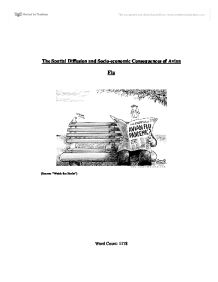 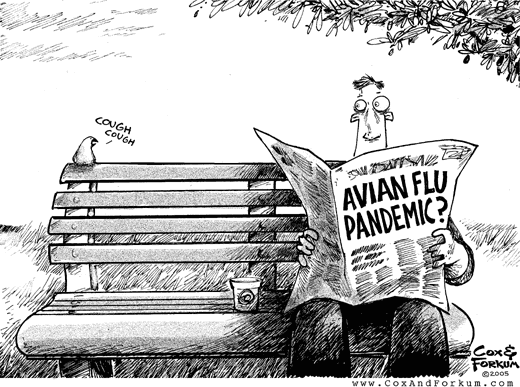 Avian Flu first showed up in 1959 and then again in 1991 in Great Britain. These two cases of Avian Flu had similarities with the before know disease A/H5H1 which came from poultry. 2003 and 2004 more cases showed up in Southeast and East Asia which lead to the assumption that there is now a mutated more dangerous type of the A/H5H1 virus which spreads mainly through birds. In the beginning the Countries China, South Korea, Thailand, Vietnam, Indonesian, Cambodia, Malaysia and Japan were being greatly affected by the disease but that was not all. In 2005 the virus started to be found in free-living birds, which spread the disease across the globe through bird farms and migrating bird families.

In the Summer of 2005 A/H5H1 was found in Siberia and Kazakhstan and started to move closer and closer to Europe infecting poultry in Romania, Croatia and Turkey.

To slow down the movement of the disease because of human interference airports all across the globe started baggage controls and passed a law that the transportation on poultry was forbidden. These rules were removed when there was proofed that the disease spread through the wild birds, which were migrating from the south. 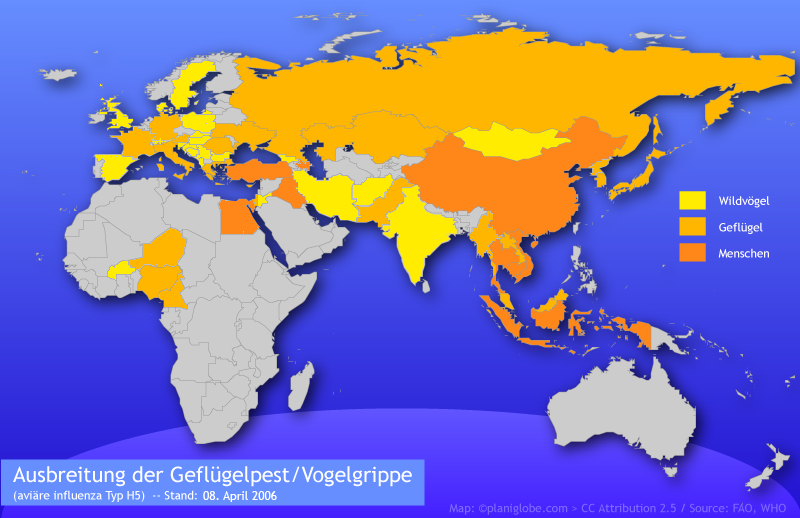 Scientists found out that the A/H5H1 virus has mutated and has evolved into a virus, which does not kill its host right away, but the animal stays alive only very mildly sick so it can spread the virus to more animals. This is dangerous because the means that the spreading out of the virus can not be stopped because it is not obvious anymore which animal is effected and killing every wild bird and duck would not be possible and correct.

The virus is not directly seen as dangerous for humans but there are worries that it might become dangerous. Worries that this might be the case showed up when in Mai 2005 pigs got infected in China and died but also cats have been infected. In February 2004 the World health Organization (WHO) first reported about a spreading of Avian flu in cats. 14 – 15 infected house cats died because of the virus. In 2 years more cases of Avian Flu in cats showed up. The biggest worry was that the cats would infect their owner with the Flu which would cause a great uproar around the world and people would live in fear, which would have meant that hospitals would get crowded by scared people who want to get tested and patients who really need medical attention would suffer and that would only cause more problems.

Symptoms of A/H5H1 in Birds are similar to the symptoms that most viruses have in poultry. The first and sign of Avian Flu is that the host gets weak and seems tired and confused. High fiver, heavy breathing and bumps on neck, head, legs. Feet and body are also visible sign of an effected bird. The bumps are caused by water storage in areas of the body. The birds get diarrhea, which spreads the virus though, their waste without the bird having to land or get close to another animal. The bird has a very low chance of surviving this disease, there are only few cases where the bird survived but it would not be able to live like it did before the infection.

Avian Flu also had a great impact on the world economy and the economy of the countries that were affected. People were afraid to get infected by the virus and stopped buying and eating poultry products. Also the supply went down drastically due to the shortage in poultry not infected. People switched from poultry to substitute goods like beef and pork.

The UN-organization for agriculture and Nutrition came up with guidelines for how poultry and animals have to be held in order for diseases like Avian Flu not so spread as quickly and it can be prevented more easily. Also the hygiene standards for animals needed to be raised. Animals, which died, need to be burnt or buried deeply so that what ever killed the animal does not spread to other ones. If an animal is found to be sick it needs to be killed immediately, removed from it group and it is meat is not allowed to be used for sale. This was also a problem with BSE, also know as the ´mad cow disease´ which was dangerous to the human and spread by people not following the UN guidelines of how to regulate beef.

Scientists have given thousands or animals and people shots which gave there body the dead virus so it can make its own anti bodies and the animal or person an not become infected anymore. This cannot prevent a long-term stopping of the virus because it can mutate so that the anti bodies the body made don’t work against the new type of A/H5H1 virus and the animal or person gets sick.

Since the first sign of Avian Flu in humans there have been 256 infected people of which 151 people have died. The cases of Avian Flu have come up all around the globe killing people in:

Recommendations for humans to not get infected by the deadly A/H5H1 virus given by the American Center for Technology and National Security are to wear a mask, washing hands regularly, living hygienically and avoiding large numbers of people, which is an easy place to get infected.

Avian Flu is a virus, which has done great damage over the 4 years of its high presence and still leaves many unsolved questions. There is a treatment for humans but it is only effective if the virus is identified in a very early stage. The medical treatment is not available to everyone, which is a great worry. The main countries which have been affected by the Avian Flu are economically less developed countries where there is great poverty and the medicine is cannot be afforded by everyone. There are many organizations, which try to help the people who cant help themselves but it is impossible to supply everyone everywhere.

„Avian Influenza A Virus Infections of Humans.“ Centers for Disease Control and Prevention. May 23 2008. 29. November 2008. <http://www.cdc.gov/flu/avian/gen-info/avian-flu-humans.htm>.