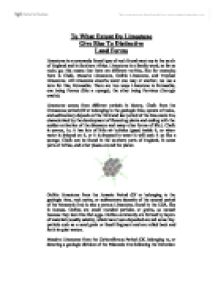 To What Extent Does Limestone Give Rise To Distinctive Land Forms.

To What Extent Do Limestone Give Rise To Distinctive Land Forms Limestone is a commonly found type of rock found most my in the south of England and in Southern Africa. Limestone is a family word, as far as rocks go; this means that there are different verities, like for example; there is Chalk, Massive Limestone, Oolitic Limestone, and Tropical Limestone. All Limestone absorbs water one way or another, we use a term for this; Permeable. There are two ways Limestone is Permeable, one being Porous (like a sponge), the other being Pervious (through cracks). Limestone comes from different periods in history, Chalk from the Cretaceous period (Of or belonging to the geologic time, system of rocks, and sedimentary deposits of the third and last period of the Mesozoic Era, characterized by the development of flowering plants and ending with the sudden extinction of the dinosaurs and many other forms of life.). Chalk is porous, i.e. it has lots of little air bubbles (gaps) inside it, so when water is dripped on it, or it is dropped in water is will soak it up like a sponge. ...read more.

Formed by great pressure causing the molecules to be pushed closer together causing it to harden and become very strong, that is why it is widely used for building. Tropical Limestone from the Karst (An area of irregular limestone in which erosion has produced fissures, sinkholes, underground streams, and caverns) found in Topical climates, for example, on the equator. Massive Limestone and Chalk are sedimentary rocks, made by bedding when it was under water. Layers of sediment and minerals fell to the sea bed, and as more and more fell the more pressure there was on the earlier layers and caused it all to become a solid mass, as I explained earlier. Limestone is easily eroded or dissolved; it is dissolved and is eroded by water. As water runs over, hits or sits on limestone it picks up limestone paricals, mainly calcium. This can lead on to Micro features, Grites and caves, and with caves there are stalactites, and stalagmites, both caused my dripping water, of which has calcium in, and every time a drop of water trickles down from a crack or an uneven surface it will leave behind a very small ...read more.

So in conclusion to the question "To What Extent Do Limestone Give Rise To Distinctive Land Forms" in my opinion limestone does give rise to distinctive land forms, after all in some parts of England, there is just grey pavement of lime stone, where the rain has taken away all the soil and left the limestone to slowly erode. Because of limestone there are springs and rivers, which become waterfalls and rivers leading for miles, dry valleys, where porous limestone has absorbed all the water leaving a dry valley. Mountains and hills, made of limestone, steep hills, smooth shaped hills, vertical mountains, some climbable, not impossible all due to limestone, as I say it like this, it appears to me that limestone shapes the earth, it plays a big part in our everyday lives, Chalk for black boards, Massive Limestone for building (St. Paul's Cathedral). The lay of the land, especially down in the south west of England in the county of Dorset, is due to the limestone, after all the ridge way, is a nice smooth hill, all because it is on a soft limestone; Chalk. ...read more.