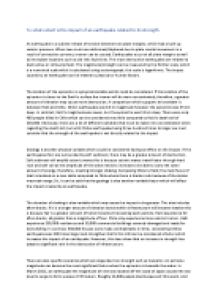 To what extent is the impact of an earthquake related to its strength. (30) (OCR A2)

Transfer-Encoding: chunked ﻿To what extent is the impact of an earthquake related to its strength. An earthquake is a sudden release of tension between two plate margins, which had a built-up seismic pressure. When two crusts are deformed/displaced due to plate crustal movement in a result of convection currents, tremor can be caused. Earthquakes occur at all plate margins as well as intra-plate locations such as old relic fault lines. The most destructive earthquakes are related to destructive or strike-slip fault. The magnitude/strength can be measured by the Richter scale, which is a numerical scale which is calculated using a seismograph, this scale is logarithmic. The impact caused by an earthquake can be related to physical or human factors. The location of the epicentre is a physical variable which could be considered. If the location of the epicentre is closer to the Earth?s surface the tremor will be more concentrated; therefore, a greater amount of vibration may cause more destruction. A comparison which supports this variable is between Haiti and Chile. Chile?s earthquake was 8.8 in magnitude however the epicentre was 35 km deep. ...read more.

If the country is and MEDC/NIC the country will have a greater amount of GDP or windfall profit which can be used on these three factors. An example of a NIC is Chile the GDP per capita is $15,000. Chile is also well known for the world?s largest copper producer. As their more developed country and Chile is a quake-prone area preparedness was high, this is because they have the income to spend on close monitoring and aseismic buildings. As Chile has a well-structured government they have strict planning policies, building codes require shake resistant construction and rapid emergency response systems, therefore, reducing the risk of destruction, due to intense vibrations. After the earthquake and the twit on 27th February, the country was able to use the $16 billion windfall profits of the copper industry, which is nationalised, to recover and provide immediate response to the locations in distress. This also means the money was used to rebuild roads, bridges, ports and the 1.5 million homes affected; this meant economic loss was minimised. So, this shows that MEDCs have the ability to minimalize impact which could be related to physical factors including strength. ...read more.

All these factors play a balanced role on the effects of an earthquake. However, an earthquake with a magnitude less than 5.5 could be considered non-detrimental therefore discarding other factors. And in contrast that, an earthquake with an extreme magnitude could be considered detrimental and be the most significant factor to the impact. Secondly, the impact is also related human factors and how well we can manage the environment to prepare for such events. As shown above, the Park model can show the level of the economy and how the time and economy can recover. The dashed line shows and MEDC?s/NIC such as Chile and the filled line show an LEDC such as Haiti. We can see that it takes a longer time for the economy to recover in LEDC due to the factors I?ve identified in the previous paragraphs. If the country is not in the situation to prepare itself, physical factors can be amplified therefore creating a greater impact. The location of the epicentre concerning urban and rural areas is also factors that can supplement physical factors increasing the impact of an earthquake, if in an urban area. However, strength is still the primary factor that at a certain magnitude other human and physical factors come into play. ...read more.