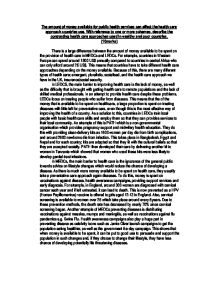 With reference to one or more schemes, describe the contrasting health care approaches used in wealthy and poor countries.

There is a large difference between the amount of money available to be spent on the provision of health care in MEDCs and LEDCs. For example, countries in Western Europe can spend around 1800 US$ annually compared to countries in central Africa who can only afford around 25 US$. This means that countries have to take different health care approaches depending on the money available. Because of this, there are many different types of health care; emergent, pluralistic, socialised, and the health care approach we have in the UK, insurance/social security.

In LEDCS, the main barrier to improving health care is the lack of money, as well as the difficulty that is brought with getting health care to remote populations and the lack of skilled medical professionals. In an attempt to provide health care despite these problems, LEDCs focus on treating people who suffer from diseases. This means that the of the money that is available to be spent on healthcare, a large proportion is spent on treating diseases with little left for preventative care, even though this is the most effective way of improving the health of a country. As a solution to this, countries in LEDCs train local people with basic health care skills and employ them so that they can provides services to their local community. An example of this is PATH which is a non-governmental organisation which provides pregnancy support and midwifery health education. They do this with providing clean-delivery kits as 1600 women per day die from birth complications, and around 2600 newborns die from infection. This takes place in Bangladesh, Egypt and Nepal and for each country; kits are adapted so that they fit with the cultural beliefs so that they are accepted socially. PATH then developed their care by delivering another kit to women in Tanzania which showed that women who used these kits were less likely to develop genital-tract infections.

In MEDCs, the main barrier to health care is the ignorance of the general public towards advice on lifestyle changes which would reduce the chance of developing a disease. As there is much more money available to be spent on health care, they usually take a preventative care approach again diseases. To do this, money is spent on vaccinations against disease, health awareness campaigns, providing support services and early diagnosis. For example, in England, around 300 women are diagnosed with cervical cancer each year and if left untreated, it can lead to death. This is now prevented as a HPV (Human Papillomavirus) vaccine is offered to girls aged 12-13 in England. Also, cervical screening is available to women over 25 which take place around every 5years. Due to these prevention methods, the death rate has decreased by nearly 70% since cervical screening began. Another example of MEDCs preventing diseases is distributing vaccinations against measles, mumps and meningitis, as well as vaccinations against flu pandemics e.g. Swine Flu. Health awareness campaigns also play a huge part in preventing disease as celebrity icons such as Jamie Oliver launch campaigns to get the population eating healthier, as well as the government 5-a-day campaign. This shows that when money is available to be spent, it can be put to good use to persuade and support the population in such changes and, if they choose to change their lifestyle, they have less chance of developing potentially life threatening diseases.