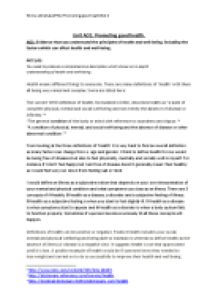 ﻿Emma LittlehalesF912 Promoting good healthSet 4 Unit AO1: Promoting good health. AO1: Evidence that you understand the principles of health and well-being, including the factors which can affect health and well-being. AO1 (A): You need to produce a comprehensive description which shows an in-depth understanding of health and well-being. Health means different things to everyone. There are many definitions of ?health? with them all being very varied and complex. Some are listed here: The current WHO definition of health, formulated in 1948, describes health as ?a state of complete physical, mental and social well-being and not merely the absence of disease or infirmity.?[1] ?The general condition of the body or mind with reference to soundness and vigour.?[2] ?A condition of physical, mental, and social well-being and the absence of disease or other abnormal condition.?[3] From looking at the three definitions of ?health? it is very hard to find an overall definition as many factors can change this i.e. age and gender. I think to define health for me would be being free of diseases but also to feel physically, mentally and socially well in myself. For instance if I don?t feel happy but I am free of disease doesn?t generally mean I feel healthy as I could feel very run down from feeling sad or tired. I would define an illness as a subjective notion that depends on your own interpretation of your mental and physical condition and what symptoms you class as an illness. ...read more.

Beth visits her GP with her daughter Molly who is 5, she has 2 other children ages 7 and 9. Beth is on Jobseekers Allowance and gets £210 a week for the 4 of them her bills come to £150 a week. They live in high-rise flats in a council estate, they have lived there nearly a year and it only has two bedrooms. Both bedrooms and front room are damp and mouldy and have condensation running down the walls, she has no carpets so the flat is very cold. The flats are also due to be demolished in 8 days and she has found nowhere else to live. Molly has developed acute bronchitis from the dampness of the rooms and is giving her severe chest discomfort. Beth and the kids have also been in and out of the doctors for months with constant flu, coughs and colds. Beth has started to smoke and drink more regularly from the stress of everything and has now been prescribed antidepressants. Housing and stress can both affect health. For example in the case study Beth has lived in squalid conditions for the past year, her and her kids have developed all sorts of colds and flu’s and other illness’ as well as her youngest getting bronchitis. This was caused by the damp in her flat which breeds mould spores, and these can get into your lungs causing breathing problems and a high risk of getting flu and other respiratory illnesses. ...read more.

Teachers are finding it hard to keep up with him as well as the other children. He finds it hard to make friends as he?s very socially shy. They are now sending him to a specialist ADHD school with other children with ADHD, he doesn?t want to go. He says he wants to stay at ?normal? school. His mum is also getting very worn out and stressed by his bad behaviour. James ADHD affects his quality of life by the education he?s getting sent to a specialist school which he does not want to go to as he likes the experience of a state school. It also affects his learning and may not get very good grades as he can?t concentrate which will affect him getting a job or getting into college/university later in life. His ADHD also makes him very shy, he struggles to make friends. So socially may not be getting the support and fun that you get with a friendship. He may feel lonely which could cause his ADHD to get worse and become depressed. James ADHD affects his mum as she?s getting very stressed, this could lead to smoking, binge drinking or drug use. The same for his teachers as well. The people in his classes could be finding it very hard concentrate when he is playing up and the teacher focuses their attention on James, this can affect the other children?s learning and possibly cause them to start behaving badly. ________________ [1] http://www.bmj.com/content/343/bmj.d4163. [2] http://dictionary.reference.com/browse/health. [3] http://medical-dictionary.thefreedictionary.com/health. ...read more.