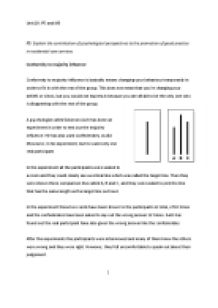 ﻿Unit 29: P5 and M3 P5: Explain the contribution of psychological perspectives to the promotion of good practice in residential care services Conformity to majority influence Conformity to majority influence is basically means changing your behaviour temporarily in order to fit in with the rest of the group. This does not mean that you?re changing your beliefs or views, but you would not express it because you are afraid to be the only one who is disagreeing with the rest of the group. http://figures.boundless.com/1104/full/asch-experiment.png A psychologist called Solomon Asch has done an experiment in order to test out the majority influence. He has also used confederates, as did Moscovici, in his experiment, but he used only one real participant. In the experiment all the participants were seated in a room and they could clearly see a vertical line which was called the target line. Then they were shown three comparison line called A, B and C, and they were asked to pick the line that has the same length as the target line out loud. In the experiment these two cards have been shown to the participants in total, of 18 times and the confederates have been asked to say out the wrong answer 12 times. Asch has found out the real participant have also given the wrong answer like the confederates. After the experiments the participants were interviewed and many of them knew the others were wrong and they were right. However, they felt uncomfortable to speak out about their judgement. (M, 2010, p. 324) and (Boundless, ND) The positive and negative effects of this type of influence on care staff?s attitude change, for example, if the majority of the staff members at the residential care home is following the right manual handling procedures and the minority staff member is doing the wrong procedure. Then this can have a positive effect as the minority staff member will change their ways and follow the majority of the staff members. ...read more.

However, on the box of the drug the maximum dosage was stated at 10 mg. Dr Smith said that he was in a desperate hurry and told the nurses that he will sign the authorisation form later when he sees the Mr Jones later on. The night nurses were watched on to see what they would do in this situation, the drug was not real, but the nurses believed that it was a real drug. If the nurses administer this drug to the patient, they would have broken 3 hospital rules. 1. The nurses are not supposed to take instructions from someone over the phone. 2. The dosage of the drug was double the maximum limit stated on the box. 3. The drug is unauthorised as it is not in the ward stock list. What Hofling found out from the experiment was shocking to him because, 21 out of 22 nigh nurses were easily influenced into carrying out the orders made by a doctor. They should have been aware of the fact that they were not supposed to take instructions over the phone and let alone exceed the allowed dosage. From this experiment Hofling has demonstrated that people are very unwilling to question the people who have authority over them, even when they might have good reason to question them. (McLeod, 2008) This experiment can be applied to the residential care setting, for example, staff members who are working in the residential care home may also carry out orders given by someone who has higher authorities than they. If their supervisors give them order to administer a medication to an elderly resident which are higher dosage than they are allowed to give, they are more likely to carry out the order without questioning them. Even if they know that it will break the rules and are against their better judgement because it is a form of obedience that they were socialised from a young age. ...read more.