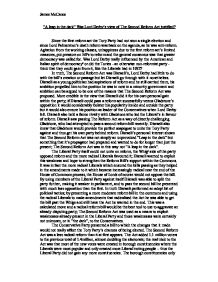 &quot;A leap in the dark&quot; Was Lord Derby's view of The Second Reform Act justified?

"A leap in the dark" Was Lord Derby's view of The Second Reform Act justified? Since the first reform act the Tory Party had not won a single election and since Lord Palmerston's death reform was back on the agenda, as he was anti-reform. Agitation from the working classes, unhappiness due to the first reform act's limited measures, put pressure on MPs to reform and the general consensus was that greater democracy was called for. Was Lord Derby really influenced by the American and Italian spirit of democracy� or did the Tories - an otherwise non-reformist party - think that they could gain from it, like the Liberals had in 1932? In truth, The Second Reform Act was Disraeli's, Lord Derby had little to do with the bill's creation or passage but let Disraeli go through with it nonetheless. Disraeli as a young politician had aspirations of reform and he still carried them, his ambition propelled him to the position he was in now in a minority government and ambition can be argued to be one of the reasons that The Second Reform Act was proposed. More credible is the view that Disraeli did it for his own personal gain within the party; if Disraeli could pass a reform act successfully versus Gladstone's opposition ...read more.

This was a calculated move and a radical reform bill would be the best tool to use to aggravate an already disputing party; The Second Reform Act was used as a means to exploit weaknesses already present in the Liberal Party and those weaknesses were certainly not unknown, or in "the dark", to the Conservatives. The Conservative Party presented a bill to which the changes that it made would not really affect the Tory Party's chances of being elected. The Second Reform Act was a less radical reform than it at first appears. The Act added 1.1 million voters to the previous total of 1.4million, almost doubling the electorate; the real trick to the Act was that most of the new votes were created in borough constituencies where the Liberals were most popular and only created more Liberal voting people - thus the Liberal Party did not gain any more constituencies. The borough constituencies only gained 45% more voters whereas the counties gained 135%. By passing the reform act the Conservatives hoped that a lot of the working class might change their opinion of the Tories and, if they were lucky, the Tories would gain a few seats from the snide redistribution. "At best, therefore, the Conservatives would gain, at worst they would not lose." ...read more.

The Tory Party knew what they were doing in presenting an apparently radical bill and were only appeasing the popular pressure groups at this time with political trickery, the thought of fairness and democracy did not enter the minds of these politicians and the bill was certainly not the unprecedented act of generosity which Lord Derby's statement implies that it is. Though the in the passage through parliament Disraeli did not entirely know what to expect and although the effect the Act would have on politics in Britain was not entirely clear, it was certainly less than "A leap in the dark". Disraeli and Lord Derby tried to appear to be making an unpredictable move of generosity and democracy when it was in fact a quite cunningly devised plan to consolidate the Tory electorate and destroy opposition from the Liberal Party. � American Civil War was fought over slavery and democracy. Italy recently unified and the spirit of democracy was also fought for there. Historians and novelists wrote inspired books about democracy and this had influenced some British MPs. � Whig is the term used to refer to the older, more traditional Liberals who were more in favour of Laissez-faire and such policies that did not involve working-class or any radical politics. ...read more.