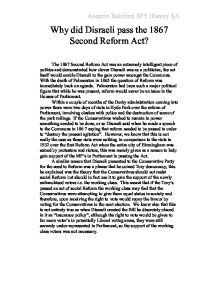 Why did Disraeli pass the 1867 Second Reform Act?

Why did Disraeli pass the 1867 Second Reform Act? The 1867 Second Reform Act was an extremely intelligent piece of politics and demonstrated how clever Disraeli was as a politician, the act itself would enable Disraeli to the gain power amongst the Commons. With the death of Palmerston in 1865 the question of Reform was immediately back on agenda. Palmerston had been such a major political figure that while he was present, reform would never be an issue in the Houses of Parliament. Within a couple of months of the Derby administration coming into power there were two days of riots in Hyde Park over the reform of Parliament, involving clashes with police and the destruction of some of the park railings. If the Conservatives wished to remain in power something needed to be done, or so Disraeli said when he made a speech to the Commons in 186 7 saying that reform needed to be passed in order to "destroy the present agitation". ...read more.

We know also that this is not entirely true as when Disraeli created the Bill he discretely placed in it an "insurance policy", although the right to vote would be given to far more voter's in potentially Liberal voting areas, they were still severely under-represented in Parliament, so the support of the working class voters was not necessary. Tory democracy was not in actual fact beneficial to the working class, indeed the only people who would benefit from it were the Conservatives themselves, this is because Tory democracy was not about helping the working class but instead, gaining there support while doing as little social reform as possible, this is shown in 1866 when the Conservatives joined forces with several right wing Liberals in putting down the Second Reform Bill, if he had really wished to improve conditions for the working class then Disraeli would not have let his rivalry with Gladstone come between him and social reform. ...read more.

An additional benefit to Disraeli in passing the Second Reform Act was his intense dislike of Ewart Gladstone, the rivalry between Disraeli and Gladstone had been present since the repeal of the Corn Laws in 1845, and during the 1866 Russel administration Disraeli had cleverly demolished an attempt by Gladstone to push through a Second Reform Bill. If therefore, Gladstone was able to push through a Reform Bill of his own only a year later he would be humiliating the Liberals and in particular Gladstone himself, this is a concept he called, "to dish the Whigs". Principally the reasons for Disraeli passing the 1867 Second Reform Act was to gain power for himself among the government, potentially succeeding Derby as the Prime minister. However, his stated political reasons of the time might simply have been said to justify reform amongst his own party. Aneurin Rainbird SF5 History SA ...read more.

This response offers a good range of explanations for the reform bill of 1867, with awareness of Disraeli's personal and political context shown throughout. Some explanations lacked depth and the conclusion certainly could have been developed further.