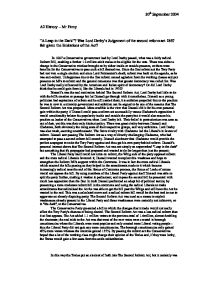 &quot;A Leap in the Dark&quot;? Was Lord Derby's Judgement of the second reform act 1867 fair given the limitations of the Act?

A2 History - Mr Finny "A Leap in the Dark"? Was Lord Derby's Judgement of the second reform act 1867 fair given the limitations of the Act? In 1867 a Conservative government lead by Lord Derby passed, what was a fairly radical Reform Bill, enabling a further 1.2 million adult males to be eligible for the vote. There was either a change in the Conservative mindset brought on by either inside or outside pressure, or there were benefits for the Conservatives to pass such a bill themselves. Since the first reform act the Tory Party had not won a single election and since Lord Palmerston's death, reform was back on the agenda, as he was anti-reform. Unhappiness due to the first reform caused agitation from the working classes and put pressure on MPs to reform and the general consensus was that greater democracy was called for. Was Lord Derby really influenced by the American and Italian spirit of democracy? Or did Lord Derby think that he could gain from it, like the Liberals had in 1932? Disraeli's was the real motivation behind The Second Reform Act, Lord Derby had little to do with the bill's creation or passage but let Disraeli go through with it nonetheless. ...read more.

In truth Disraeli performed an adept bit of political tactics; by presenting a more moderate reform bill in the commons and using the radical Liberals to make amendments that radicalised the Act he was able to get the bill past the Whigs and still have the Act he wanted in the end. This was a calculated move and a radical reform bill would be the best tool to use to aggravate an already disputing party; The Second Reform Act was used as a means to exploit weaknesses already present in the Liberal Party and those weaknesses were certainly not unknown, or in "the dark", to the Conservatives. The Conservative Party presented a bill to which the changes that it made would not really affect the Tory Party's chances of being elected. The Second Reform Act was a less radical reform than it at first appears. The Act added 1.1 million voters to the previous total of 1.4million, almost doubling the electorate; the real trick to the Act was that most of the new votes were created in borough constituencies where the Liberals were most popular and only created more Liberal voting people - thus the Liberal Party did not gain any more constituencies. ...read more.

The terms of the Act show that it was not actually far reaching enough to make massive changes to Britain as a whole - thought the Liberal Party would still be seen as the working class party, the Tories would still be seen as the appealing party to the wealthier people in society. The Tory Party knew what they were doing in presenting an apparently radical bill and were only appeasing the popular pressure groups at this time with political trickery, the thought of fairness and democracy did not enter the minds of these politicians and the bill was certainly not the unprecedented act of generosity which Lord Derby's statement implies that it is. Though the in the passage through parliament Disraeli did not entirely know what to expect and although the effect the Act would have on politics in Britain was not entirely clear, it was certainly less than "A leap in the dark". Disraeli and Lord Derby tried to appear to be making an unpredictable move of generosity and democracy when it was in fact a quite cunningly devised plan to consolidate the Tory electorate and destroy opposition from the Liberal Party? American Civil War was fought over slavery and democracy. Italy recently unified and the spirit of democracy was also fought for there. Historians and novelists wrote inspired books about democracy and this had influenced some British MPs. 30th September 2004 ...read more.