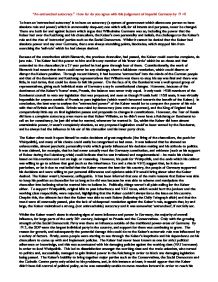 An entrenched autocracy. How far do you agree with this judgement of Imperial Germany by 1914?

"An entrenched autocracy." How far do you agree with this judgement of Imperial Germany by 1914? To have an 'entrenched autocracy' is to have an autocracy (a system of government which allows one person to have absolute rule and power) which is unmoveably deep-set; one which will, for all intents and purposes, never be changed. There are both for and against factors which argue that Wilhelmine Germany was so, including the power that the Kaiser had over the Reichstag and his chancellors, the Kaiser's own personality and beliefs, the challenges to the Kaiser's rule and the rise of 'extremist' parties such as the Social Democrats. Whilst it cannot be denied that the Kaiser had absolute power and say over Germany, there was always stumbling points, blockades, which stopped him from exercising the 'self-rule' which he had always desired. Because of the constitution which Bismarck, the previous chancellor, had passed, the Kaiser could exercise complete, de jure rule. The Kaiser had the power to hire and fire any member of his 'inner circle' which he so chose and that extended to the chancellor; in a 27 year period he had gone through four of them. Constitutionally, the work of Bismarck had meant that there could never be any challenge, short a full-blown revolution, which could disarm or disrupt the Kaisers position. ...read more.

could indicate that he was irrational and megalomaniacal - he made his choices based on his emotions and not on logic or reasoning. However, his push for Weltpolitik, and the ends which his cabinet was willing to go to achieve that goal (such as the Inheritance Tax and a rise in VAT) suggest that, be it due to patriotism, or be it due to real belief that the Kaiser meant the best for his country, the people of Germany supported his decisions and were willing to put personal differences and opinions aside if it would bring about what the Kaiser desired. The Kaiser wasn't, however, unflappable. It has been inferred that one of the main reasons that Bulow was able to keep his position as chancellor for as long as he did was because he was able to scheme and manipulate the chancellor into believing what he wanted him to believe in. Politically, things weren't all plain sailing for the Kaiser either. To support Weltpolitik, original bills to pass Inheritance and VAT taxes, which would hurt the Junkers and the working class respectfully, were rejected, highlighting that the Kaiser couldn't always force the issue on his country. Despite this, the ultimate fact that the Kaiser was able to sack Bulow (following the Daily Telegraph affair) and that the taxed were all eventually passed, plus the lack of widespread revolution against the Kaiser's rule, suggests that, by and large, the Kaiser maintained a strong, (not unbreachable) ...read more.

It is questionable then as to why the Kaiser didn't chose to ban (or at least block their appearance in the Reichstag) the left-wing parties. Perhaps he didn't think of it; but more likely is that he knew that there would be sizeable opposition to his move and that it could damage not only his reputation, but also his position as long-term, unconditional leader of Germany. His 'fear' of what such drastic action could result in meant that total autocracy wouldn't be possible; unlike the Tsar in Russia (up to the Bolshevik revolution), the Kaiser had sizeable and resonant opposition. Ultimately, the combination of internal and external influencers on the Kaiser, as well as his own ineptitude to deal with social and political pressure and choice (through his own personality defects / ignorance) meant that only in his own head would the Kaiser ever have been able to have complete, autocratic rule over Germany. Once again, I believe that when you contrast the absolute rule the Tsar had over Russia c.1900-1914 and compare that with the troublesome rule the Kaiser had over the same period, it infers that the Kaiser never really had an 'entrenched autocracy.' His personal problems were too numerous and the external influence of the left-wing, possibly impending-revolutionary beliefs were all contributory to the Kaiser being entrenched de jure only; in de facto terms, he was never strong, intelligent or able enough to command complete, autocratic rule. ...read more.