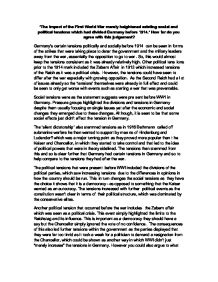 The impact of the First World War merely heightened existing social and political tensions which had divided Germany before 1914. How far do you agree with this judgement?

'The impact of the First World War merely heightened existing social and political tensions which had divided Germany before 1914.' How far do you agree with this judgement? Germany's certain tensions politically and socially before 1914 can be seen in forms of the strikes that were taking place to deter the government and the military leaders away from the war, essentially the opposition to go to war. So, this would almost keep the tensions consistent as it was already relatively high. Other political tensions prior to the 1914 mark included the Zabern Affair in 1913 which increased tensions of the Reich as it was a political crisis. However, the tensions could have seen to differ after the war especially with growing opposition. As the Second Reich had a lot of issues already so the 'tensions' themselves were already in full effect and could be seen to only get worse with events such as starting a war that was preventable. Social tensions were as the statement suggests were present before WW1 in Germany. Pressure groups highlighted the divisions and tensions in Germany despite them usually focusing on single issues yet after the economic and social changes they emerged due to these changes. ...read more.

However you could also argue to what extent was this on the same level as a crippling war that destroyed the moral and much more within Germany. Furthermore, Flottenpolitik was another aspect of the tensions that escalated in Germany pre-war. This was due to von Tirpitz pushing a Naval Law to expand the German's navy and a way of bringing ideas together from government policy and popular pressure. This navy push expanded tensions within Germany and tensions between Britain due to the race for a better navy. These hopes, prompted mass production to keep up with the demands of the Navy Laws. This pre-war political movement created certain tensions and shows that it wasn't just WWI that would have merely increased tensions as it shows it would have just about stayed the same. Not only this but other political factors that increased tensions were as certain classes were impacted on like the peasantries were seen to be alienated by the government regulations post food rationings. The urban working classes resented state controls and the middle classes were in an unfamiliar surrounding with for instance no savings that were decreasing in value. ...read more.

The suffering was also seen when the majority of the population were starving due to the navy of Britain. This mainly caused economic problems as it crippled banks so there was a decrease in Germany's production towards the war. Despite relevant differences in tensions before and throughout war it is shown that some factors were more important to show that the judgement must be an increase in tensions. However, certain aspects disagree with the judgement like the burgfrieden. These aspects though, do not compare those to what the war created and the ones the Reichstag created and so the judgement is seen to be true. The judgement that it merely heightened certain tensions is to some extent true even though factors suggest it didn't, and they suggest it lessened or stayed the same. Though, this would be an understatement as a war can only increase devastation and an exhaustion in terms of social and political aspects. Including the fact it would have worn out the moral of the public, given them little hope in those that hoped and predicted a victory, depleted population, a loss to the economy and of course the effect it had on other countries, which would lead to the conclusion that it did heighten the social and political tensions in Germany. ...read more.

This response focuses well on the question and the author gives careful consideration to pre-war tensions but the counter-argument (ie. the effects of the war) is less well developed. Some grammatical problems. 4 out of 5 stars.