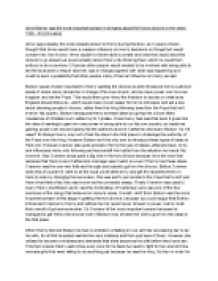 Anne Boleyn was the most important person in bringing about the Kings divorce in the years 1529 - 33. Discuss. (24 marks)

Transfer-Encoding: chunked ﻿Anne Boleyn was the most important person in bringing about the King?s divorce in the years 1529 - 33 (24 marks) Anne was probably the most closest person to Henry during this time, so it would of been thought that Anne would have a massive influence on Henry decisions on things that would concern her, the divorce. Anne wouldn?t of been able to create any laws that would allow the divorce to go ahead but could certainly tempt Henry into thinking them which he could then enforce to be a new law. Of course other people would needed to be involved with being able to set the laws and to ensure whoever was in charged agreed with what was happening so it could've been a possibility that other people many of had an influence on Henry as well. Boleyn would of been important to Henry wanting the divorce as she introduced him to Lutheran ideas of where Henry should be in charge of his own church, and so have power over his own kingdom and not the Pope. This would then give Henry the freedom to decide on what laws England should follow by, which could make it a lot easier for him to introduce and set a law about allowing people to divorce, rather than the King following laws from the Pope that isn't even in his country. ...read more.

However she refused to become a mistress and demands that shes becomes his wife before they have sex. This then makes Henry want Anne even more for he feels he need to fight for her and isn't like normals girls that were willing to do anything just because he was the King. So then in order for Henry to be able to be with Boleyn he needed to divorce Catherine, this would then encourage Henry to push on for a divorce to Catherine because that would mean he?d be able to get who he wants. Nearer the process of getting the divorce Boleyn falls pregnant, which then causes the process of the divorce to speed up quicker because if that baby is born outside of their marriage, it would again be illegitimate and won?t be in line for the throne. This pregnancy could be argued that she planned for it to happen as she knew that it would make Henry want the divorce to come quicker in case it was a male. So for Boleyn refusing to become a mistress and getting pregnant may be why the divorce came around a lot quicker than it would of been. For the divorce to be possible, laws needed to be changed. This is why Thomas Cromwell is very important at this stage for he actually is the man that makes Henry the lawmaker of the church, giving him legal possibilities for Henry to marry Boleyn. ...read more.

son, to suggest that he would consider using him as king if no others are produced as he would be high enough in the church to make this possible. Also due to him needing a heir so much if he was following the leviticus views then the marriage between him and Catherine is actually illegal and therefore can?t have children, so he would need to get married to someone else because they shouldnt of married in the first place, which is why he is so for the divorce. I think Henry is the more important figure for this because he is one that desperately needs a male heir so even though he loves Anne at the moment it is very clear that it doesn't last very long and so he could of found anyone to give him a son. Overall I don't think Anne is the most important person for getting the divorce for the King because even though she could have influenced him in the matter she wasn't the one who actually got anything done, she was just an extra that wasn't necessarily for the process to happen. I think Henry was the more important person because he was King and he was the one who put in charge Cranmer and Cromwell who made the laws and got them married, but to be honest he could have got anyone to do that for him, making Henry the more important person for the divorce. ...read more.