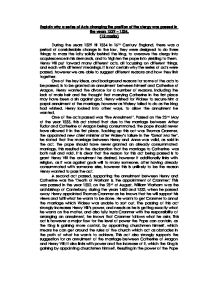 Explain why a series of Acts changing the position of the clergy was passed in the years 1529 1534. (12 marks)

Explain why a series of Acts changing the position of the clergy was passed in the years 1529 - 1534. (12 marks) During the years 1529 till 1534 in 16th Century England, there was a period of considerable change in the law, they were designed to do three things; to mass the laity solidly behind the king, to overawe the clergy into acquiescence in his demands, and to frighten the pope into yielding to them. Henry VIII put forward many different acts, all focussing on different things, and each with different meanings. It is not certain why the series of acts were passed, however we are able to suggest different reasons and how they link together. One of the key ideas, and background reasons for some of the acts to be passed, is to be granted an annulment between himself and Catherine of Aragon. Henry wanted the divorce for a number of reasons, including the lack of male heir and the thought that marrying Catherine in the first place may have been a sin against god. Henry wished for Wolsey to secure him a papal annulment of the marriage, however as Wolsey failed to do as the king had wished, Henry looked into other ways, to allow the annulment he wanted. One of the acts passed was 'The Annulment'. Passed on the 23rd May of the year 1533, this act stated that due to the marriage between Arthur Tudor and Catherine of Aragon being consummated, the pope should never have allowed it in the first place. ...read more.

This overall limited the papacy power as he no longer has the ability to grant papal dispensation and non-residence, which before hand would have been granted on their own will, without the need of the monarchy. Additionally, in 1534 the 'Supplication of the ordinaries and the submission of the Clergy' act was passed. This introduced the fine of imprisonment at the king's pleasure against those which opposed, by either speaking or acting against the position of the monarchy. This increased Henry's power as overall it meant that the church was more controlled by the monarchy, it was also in control of the assembly of people within the church, this additionally prevented minor appeal to Rome. Of course, due to the monarch gaining so much power, the popes was limited, by being deprived of legislate authority in England. The 'Charge of Praemunire' was also a major law passed in the 16th century, as it affected many people and changed the views of others. It was first used in 1529, then 1530 then continued in 1531. This act made it treasonable to support foreign authority, the pope, or foreign laws above the Church Of England. If anyone was caught talking or acting against the Church of England, then they could be sentenced to death. This act massively changed the position of the clergy in the church, as Henry had the ability to get rid of any member he desired to, this was not legally possible beforehand. ...read more.

Religion is also a reason however it links with each of the acts, as it always a background, yet main feature. The reason acts supporting an annulment between Henry VIII and Catherine of Aragon, were granted was because Henry was extremely eager to marry Anne Boleyn, have a male heir to the throne, and rid himself of guilt, of phrases in the bible saying that he shouldn't have married Catherine in the first place. The acts resulting in the gain or loss of power, for Henry and the papacy, were passed all in the favour of Henry VIII, making things which were once obstacles easy to achieve without problems occurring, he changed it around so that he, himself was now the obstacle, on again meaning that he could get what he wanted, as everything had to pass by him. Those acts passed, based on the gain of money, link with those providing power, are mostly so that Henry can gain back the money he needs. However, despite all three of the important reasons for separate acts being passed, I believe that Divorce is the main reason a series of Acts changing the position of the clergy was passed in the years 1529 - 1534. I believe this as, all of those which are focussing on the gain of either power or money, lead back to making certain situations easier for Henry, resulting in the annulment being granted for him as he wished. I believe that the majority of the acts, result in pathways being cleared, which would have beforehand held obstacles causing the annulment being granted, harder as initially thought. ...read more.