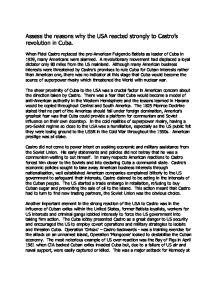 Assess the reasons why the USA reacted strongly to Castro(TM)s revolution in Cuba.

Assess the reasons why the USA reacted strongly to Castro's revolution in Cuba. When Fidel Castro replaced the pro-American Fulgencio Batista as leader of Cuba in 1959, many Americans were alarmed. A revolutionary movement had displaced a loyal dictator only 80 miles from the US mainland. Although many American business interests were threatened by Castro's promises to rule Cuba for Cuban interests rather than American one, there was no indicator at this stage that Cuba would become the source of superpower rivalry which threatened the World with nuclear war. The sheer proximity of Cuba to the USA was a crucial factor in American concern about the direction taken by Castro. There was a fear that Cuba would become a model of anti-American authority in the Western Hemisphere and the lessons learned in Havana would be copied throughout Central and South America. The 1825 Monroe Doctrine stated that no part of the Americas should fall under foreign domination, America's greatest fear was that Cuba could provide a platform for communism and Soviet influence on their own doorstep. ...read more.

The most notorious example of US over-reaction was the Bay of Pigs in April 1961 when CIA backed Cuban exiles invaded Cuba but, due to a failure of US air and naval support, were easily captured or killed. This was a major setback for Kennedy at the start of his term of office, especially as the Soviets had achieved the first Cosmonaut in space in the same month. The Bay of Pigs convinced Castro of the need for further Soviet support, defensive military aid as well as economic assistance. It was the placing of offensive nuclear weapons on Cuba in 1962 which evoked the strongest reaction from Washington. Here SS-4 and SS-5 missiles were placed within range of all major US cities, when they were identified on 16 October, Kennedy formed ExComm to discuss the level of US response to the threat placed on the USA by missiles so close to their shores. Even though Soviet ICBM's could provide just as much of a threat, and the USA had missiles on the Soviet border in Turkey, the perception of having nuclear warheads so close to home alarmed the US Government and public. ...read more.

Both Kennedy and Khrushchev were unwilling to take the decision to make the Cuban issue one resolved by nuclear exchange. Had more aggressive forces within ExComm been allowed to launch a surgical strike or an invasion then the outcome could have been devastating. In public, the perception was one of success for the US in October 1962, but Castro would remain in place to present an alternative to US domination in the Americas, with Soviet backing. In many respects the US precipitated the crisis in 1962 as a result of earlier hostility shown towards Castro. The US believed it needed to act strongly against Cuba in order to prove its dominance in its own sphere of influence and to ensure the US public that it was not losing the Cold War. Miscalculations about Castro's initial intentions forced Cuba into Soviet hands and through the Bay of Pigs led to the placing of offensive nuclear weapons on Cuba. The presence of these weapons was intolerable to US interests and resulted in the strongest reaction in order to show the US could stand up to Soviet encroachment in the Cold War, especially in its own back yard. ...read more.