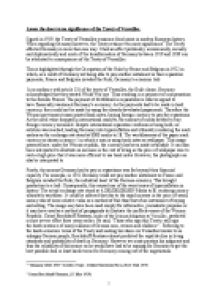 Assess the short-term significance of the Treaty of Versailles.

ï»¿Assess the short-term significance of the Treaty of Versailles. Signed in 1919, the Treaty of Versailles remains a focal point in modern European history. When regarding Germany however, the Treaty retains even more significance. The Treaty affected Germany in more than one way. It had an effect politically, economically, socially and diplomatically and much of the transformation of Germany between 1919 and 1939 can be attributed to consequences of the Treaty of Versailles. This is highlighted through the Occupation of the Ruhr by France and Belgium in 1922 in which, as a result of Germany not being able to pay another instalment in their reparation payments, France and Belgium invaded the Ruhr, Germany’s economic hub In accordance with article 231 of the treaty of Versailles, the Guilt clause, Germany acknowledged that they started World War one. Thus resulting in a payment of compensation to the Entente Powers. The payment of £6.600mill in reparations is what is argued to have financially weakened Germany’s economy. As the payments had to be made in hard currency, they could not be made by using the already devaluated papiermark. Therefore the Weimar government mass printed bank notes, buying foreign currency to pay the reparations. As the mark value dropped in international markets, the amount of marks needed to buy foreign currency increased. Despite international reparation conferences being held, no solution was reached, leading Germany into hyperinflation and ultimately rendering the mark useless as the exchange rate stood at 8000 marks to 1$. ...read more.

It was probably intended to inform Germans that the Weimar government was traitorous and to persuade them to support an alternative, although the creator of this piece of propaganda is unknown. The text, which translates to ?Germany Remembers!?, indicates the resentment felt by Germany and perhaps the idea that they will seek to right the perceived wrongs of Versailles. Given that this ?correction? would come in the form of Hitler and the Nazi party, the Treaty of Versailles can be seen as very significant, especially politically. The effects of the Treaty of Versailles can be seen to have another political impact. Although it did cause resentment and anger towards the Weimar government, due to its economic effects, it also caused the shift in political support. The unemployed, who had become disenchanted by the mainstream political parties began to back the extremist parties like that of the Nazis and Communists. Peter Stachura mentions that ?Laid-off blue-collar workers strongly favoured the KPD, while unemployed white-collar workers clearly preferred the NSDAP over the KPD?[7]. People believed that Hitler and Nazis or the Communist party (KDP) held the solution to their problems. They would see the Nazis as a party for the people; a party that could get Germany back to the power that it was prior to the Treaty of Versailles. This would be key to Hitler?s election in 1933 and thus, the Treaty of Versailles; its economic effects in particular, were a direct cause of Hitler?s rise to power and legitimate election. ...read more.