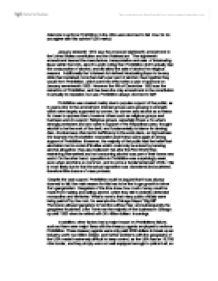 Attempts to enforce Prohibition in the USA were doomed to fail. How far do you agree with this opinion? (30 marks)

Attempts to enforce Prohibition in the USA were doomed to fail. How far do you agree with this opinion? (30 marks) January sixteenth 1919 saw the proposed eighteenth amendment to the United States constitution and the Volstead act. The eighteenth amendment banned the manufacture, transportation and sale of intoxicating liquor within the USA, also it's worth noting that Prohibition didn't actually ban the consumption of alcohol, and did allow the sale of alcohol for religious reasons. Additionally the Volstead Act defined intoxicating liquor to be any drink that contained more than half a per cent of alcohol, thus together they would form Prohibition, which went into effect after a year of approval on January seventeenth 1920. However the fifth of December 1933 saw the retraction of Prohibition, and has been the only amendment to the constitution to actually be repealed, but was Prohibition always doomed to fail? ...read more.

On the other hand, opposition to Prohibition was surprisingly weak, even when alcohol is so common, and to some a fundamental part of life, this is most likely due to that the actual opposition was disordered and scattered, therefore little chance of mass protests. Despite the vast support, Prohibition could be argued that it was always doomed to fail; the main reason for this has to be the huge growth in crime from gangsterism. Gangsters of the time knew how much money could be made from making and selling alcohol, which they did in violently defended monopolies and territories. What's more is that many public officials were being paid off by the mob, for example the Chicago Mayor "Big Bill" Thompson allowed gangsters to function without fear, and subsequently the gangsters flourished. John Torrio ran the majority of the business in Chicago up until 1925 when he retired with 30 million dollars in savings. ...read more.

Furthermore the Government certainly could have done a lot more to enforce Prohibition, as congress thought a clamp down could push away rich voters, but also in areas of reduced government, state government did not have enough power to properly implement this law. Therefore, even though there was a tremendous amount of support for Prohibition when it was first put forward by that of women's groups, religious groups and big business, Prohibition quickly lost sustain because simply people like to drink alcohol, and when something so common is taken away so suddenly, people are going to want it back, which of course led to organised crime from gangsters. Also, due to the size of America making it so difficult to police, and the unequipped officers having no support from the public (most of which distilling in their own homes), Prohibition in my opinion was always doomed to fail. ...read more.