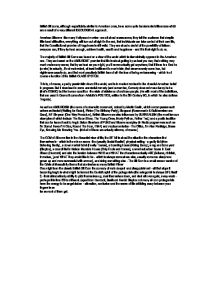 British Sit coms, although superficially similar to American ones, have some quite fundamental differences which are a result of a very different IDEOLOGICAL approach.

British Sit coms, although superficially similar to American ones, have some quite fundamental differences which are a result of a very different IDEOLOGICAL approach. American Sitcoms -like many Hollywood movies - are all about reassurance; they tell the audience that despite little local difficulties, everything will turn out all right in the end, that individuals can take control of their own life, that the Constitutional promise of Happiness is still valid. They are about a denial of the possibility of failure : everyone can, if they try hard enough, achieve health, wealth and happiness - and it is their right to do so. The majority of British Sit Coms are based on a view of the world which is diametrically opposed to the American one. ...read more.

but the human condition -the state of existence of ordinary people. (As with most of the definitions, that are used in Drama it comes from Aristotle's POETICS, written in the 5th Century BC, in which he also defines Tragedy). As well as ABSURDISM (the name of a dramatic movement, coined by Martin Esslin, which encompasses such writers as Becket (Waiting for Godot), Pinter (The Birthday Party), Stoppard (Rosencrantz & Guildernstern are Dead), NF Simpson (One Way Pendulum), British Sitcoms are also influenced by SURREALISM (the most famous examples of which include The Goon Show, The Young Ones, Monty Python, Father Ted,) and a poetic tradition that can be traced back to Anglo Saxon literature of PUNS and Bizarre wordplay (in Radio programmes such as I'm Sorry I Haven't A Clue, Round The Horn, ITMA) ...read more.

more successful with women), and doing something else - The Sit Com is a small screen version of the Crisis of Masculinity theme that dominates so many British Films/ One might term the classic British Sit Com the comedy of male despair and disappointment - all that stops it becoming tragic is what might be termed the Dunkirk spirit of the protagonists (the antagonist is always LIFE itself !) - their extraordinairy ability to pick themselves up, dust themselves down, and start all over again, every week -perhaps this time it'll be different. (apart from Hancock, Basil and Harold Steptoe not many sit com protagonists have the energy to be angst ridden - alienation, confusion and the sense of life dribbling away between your fingers is as far as most of them get. ...read more.