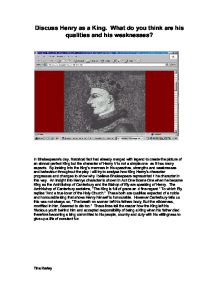 Discuss Henry as a King. What do you think are his qualities and his weaknesses?

Discuss Henry as a King. What do you think are his qualities and his weaknesses? In Shakespeare's day, historical fact had already merged with legend to create the picture of an almost perfect King but the character of Henry V is not a simple one as it has many aspects. By looking into the King's manners in his speeches, strengths and weaknesses and behaviour throughout the play I will try to analyse how King Henry's character progresses and changes to show why I believe Shakespeare represented the character in this way. An insight into Henrys character is shown in Act One Scene One when he became King as the Archbishop of Canterbury and the Bishop of Ely are speaking of Henry. The Archbishop of Canterbury exclaims, "The King is full of grace and fine regard." To which Ely replies "And a true lover of the Holy Church." These both are qualities expected of a noble and honourable king that shows Henry himself is honourable. ...read more.

This could have developed as a defence mechanism to move away or hide from his bad behaviour as a child or simply to show no weaknesses to foe or his soldiers. A good king will be able to converse with and understand the will of the common man that he does in Act Four when he passes himself off as a soldier to merge with and talk with the soldiers. The readers know Henry is in disguise even though the soldiers don't realise that it is the king trying to raise his troops morale "I myself heard the king say he would not be ransomed." Henry was a determined character who convinced a soldier Bates with his passionate use of language to become willing to fight whist still knowingly being outnumbered to the French troops in the near future battle that lay before them. This scene shows a more desirable quality of Henry in his courage but also his efforts of encouraging his men. ...read more.

I believe that Shakespeare used the character of Henry to show his patriotism and inspire it in others in his telling of the great victory of Agincourt as well as inspiring patriotism in the common man. Shakespeare in my opinion used his plays as means of creating messages to all Englishmen to strive and achieve their goals and by doing this would result in becoming a role model in reflection of Henry and becoming a perfect gentleman. Shakespeare message is clear to show if everyone were as honourable as King Henry and I think this was to set guidelines for a Utopian perfect gentleman. It would be unjust to discuss Henry as a King without relating how Shakespeare has portrayed his character so this is why I feel Shakespeare has a main role in my essay, Henry is seen to be at all times politically correct in most of his speeches, Shakespeare does not let a reader really see Henrys true self but just an almost perfect noble king. Tina Kerley ...read more.