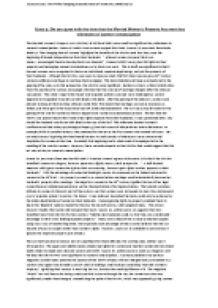 Do you agree with the view that the Married Women's Property Acts were key milestones in women's emancipation?

﻿3 Source Essay: MWPAThe changing personal status of women by 19005/10/13 Essay q.: Do you agree with the view that the Married Women?s Property Acts were key milestones in women?s emancipation The Married Women?s Property Acts (MWPAs) of 1870 and 1882 were small but significant key milestones in women?s emancipation. Source 13 and 14 to an extent support this claim. Source 13, an extract from Paula Bartley?s ?The Changing Role of Women? highlights the benefits of the MWPAs and how they were the beginning of female independence from their husbands. ?..allowed women to spend their own money...encouraged them to develop their own interests?, Women in 1882 were given full rights to their property and belongings earned via inheritance or by their own work. This in itself was significant in that it showed women were recognised in the law as individuals, separate legal beings, not just the property of their husbands. Although the MWPAs were seen by many as small, this first minor success gave 19th century women confidence and hope to continue their campaign. This determination and hope eventually led to the passing of the vote, so in this perspective, the MWPAs were significant. ...read more.

Any property owned by a woman before marriage would automatically become her husband?s property after marriage. Marriage for a woman in the 19th century signified the loss of her legal ownership over original possessions as well as the deprivation of her legal existence. The typically common attitude to women in the early part of the century was that women were not equals to men; they domineered over a ?separate sphere? in society, the home. It was believed, household harmony could only be achieved by the total subordination of women to their husbands. Women gaining rights to property enabled them to leave this ?idealistic? sphere created for them by the men of society, which angered many. The extract however implies that women did not gain that much. Source 14, unlike source 13, suggests that men benefited more from the MWPA than women, ?Middle-class husbands could, by this time, see considerable advantage in their wives holding separate property?. Many were critical of the Act due to married couples using it as a way of transferring debts. Men especially took advantage of this so some believed that the Act became a focus on couples rather than women?s rights. ...read more.

It could be said that the MWPA was significant in acknowledging that a married woman had the right to own property, therefore acknowledging that she was still a separate person in her own right, more important than the vote. However my overall conclusion is that the MWPA was not significant in itself however encouraged women to campaign for more rights and equality in the 19th-20th century, eventually gaining the vote. Source 13 supports this strongly as it notes that the key change wasn?t the act itself but the beginning of the change in attitude towards women as the ?angel in the house? theory ?ceased to be an ideal image?. Although The 14 and 15 agree that the MWPAs were not very significant in the road to woman?s emancipation, it was a stepping stone that boosted the confidence of women, the very first success in parliament. This then led to more significant changes to laws in education for women, marriage and social issues such as CDAs. As well as this, the MWPAs were significant in changing attitudes towards women in the mid-19th century. These other successes were more obviously significant however could arguably be said to have been sparked by small minor initial successes such as the MWPAs, giving women a new confidence. Women were starting to become equals with men in the eyes of the law. ...read more.