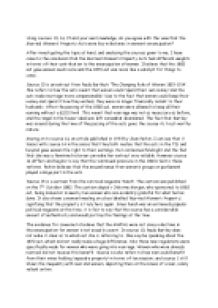 Using sources 13, 14, 15 and your own knowledge, do you agree with the view that the Married Womens Property Acts were key milestones in womens emancipation?

﻿Using sources 13, 14, 15 and your own knowledge, do you agree with the view that the Married Women?s Property Acts were key milestones in women?s emancipation? After investigating the topic at hand, and analysing the sources given to me, I have come to the conclusion that the Married Women?s Property Acts had different weights in terms of their contribution to the emancipation of women. I believe that the 1882 act gave women much more and the 1870 act was more like a catalyst for things to come. Source 13 is an extract from Paula Bartley?s ?The Changing Role of Women 1815-1914?. ...read more.

Her contextual hindsight and the fact that she was a feminine historian can make her extract very reliable. However source 14 differs and begins to say that the ?continued pressure in the 1860s? led to these reforms. Perkin believes that the encumbrance from women?s groups on parliament played a large part in the acts. Source 15 is a cartoon from the satirical magazine ?Punch?. The cartoon was published on the 7th October 1882. The cartoon depicts Osborne Morgan, who sponsored to 1882 act, being looked at in awe by two women who are evidently grateful for what he has done. It also shows a woman kneeling on a box labelled ?Married Women?s Property?, signifying that the property is truly hers again. ...read more.

Women who were already married did not receive this benefit. Source 14 also refers to how men could benefit from their wives holding ?separate property? in terms of tax evasion; and source 1 still shows the inequality with men and women, depicting them at the knees of a man, solely reliant on him. So, to sum up, I believe that the act of 1882 was the real milestone act as it gave women full financial control, as well as control over money and trades started before the marriage. It also meant that women did not have to marry for reasons of financial stability, and they were on the same level playing field as those who chose not to marry. Whether they were on level ground with men is a different story. By Toye Brimah ...read more.