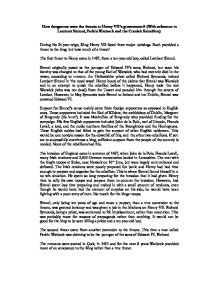 During his 24-year reign, King Henry VII faced three major uprisings - Each provided a threat to the king, but how much of a threat?

How dangerous were the threats to Henry VII's government? (With reference to Lambert Simnel, Perkin Warbeck and the Cornish Rebellion) During his 24-year reign, King Henry VII faced three major uprisings. Each provided a threat to the king, but how much of a threat? The first threat to Henry came in 1487, from a ten-year-old boy, called Lambert Simnel. Simnel originally posed as the younger of Edward IV's sons, Richard, but soon his identity was changed to that of the young Earl of Warwick, who had recently died in the tower, according to rumour. An Oxfordshire priest called Richard Symonds, trained Lambert Simnel in 'the royal ways'. Henry heard of the claims that Simnel was Warwick and in an attempt to quash the rebellion before it happened, Henry took the real Warwick (who was not dead) from the Tower and paraded him through the streets of London. However, in May Symonds took Simnel to Ireland and inn Dublin, Simnel was crowned Edward VI. ...read more.

Simnel, only being ten years of age and more a puppet, than a true contender to the throne, was granted leniency and was given a job in the kitchens on Henry VII. Richard Symonds, being a priest, was sentenced to life imprisonment, rather than execution. This was probably more for reasons of propaganda rather than anything. It would not be good for the king to be seen killing a priest and a ten year old boy. The second threat came from another pretender to the throne. This time a man called Perkin Warbeck was claiming to be the younger of the sons of Edward IV, Richard. The rumours were started in Cork, in 1491 and for the next 8 years Warbeck provided more of an annoyance to the King rather than a true threat. Saying this Warbeck did gain many powerful, but again foreign, supporters. These included, Margaret of Burgundy, again, James IV of Scotland and Maximilian, the Holy Roman Emperor. ...read more.

The rebels were met at Blackheath, just outside London and were defeated by the king's men. The rebels lost about 1000 men and a further 1,500 were captured. The main leaders were either killed or fined. Of the three rebellions I believe that Lambert Simnel's was the most threatening to Henry and his government. This is due to the simple reason that it took place within two years of Henry ascending the throne. Had it come ten years later, people would have been more comfortable and accepting of the King, but after only two years, the memory of Richard was still fresh and so more people were willing to fight. Warbeck, although he launched two major attacks without any success, mainly because of the lack of support and the Cornish rebellion, whilst having numbers and organisation their side, the just did not prepare for the fact that they would have to engage in a major battle. Leaving with the promise of not hurting a sole, the Cornish rebels were almost departing for a 'peaceful protest', so the confrontation with the kings men would have taken them almost by surprise. ...read more.